Belt conveyor idlers are usually supported by idler rollers. In some cases, they are supported by solid wood or runway of steel sheet or combination support comprising of the two types of support placed alternatively.

There are two basic types of Belt Conveyor idlers: 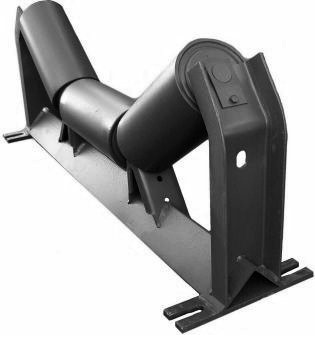 For handling unit load for handling the nominal bulk load, or for supporting belt in return side, straight idlers are used, positioned between brackets attached directly to the conveyor frame. Another type of carrying idlers is used at the loading points where the lump size and the weight of the material may seriously damage the belt if the belt were rigidly supported. Such idlers are called impact idlers. The most frequently used type of impact idlers consist of a three-roll assembly, each roll being made of spaced resilient discs. These idlers are also known as cushion idlers. 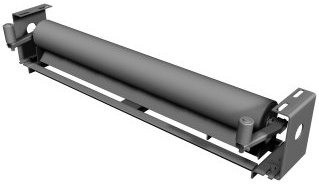 The return idlers which carry the weight of the empty belt in the return side or the lower side of the conveyor are mostly single roller straight idler. The main dimensions of the idler are the diameter and length. The diameters in millimeters of carrying and return idlers shall be selected from the following: 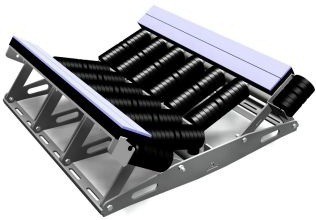 A set of self aligning idler or training idler should be provided at the carrying side and return side at an interval of 15m on the carrying run and 30m at the return run. It consists of an ordinary troughed three roller idler mounted on swivel frame which is free to swivel within a limit about a vertical pivot. When the belt shifts off the crane the edge contacts on actuating roller with a slight pressure and this makes the idler take a skewed position when a force acts which tends to steer the belt back to its central position. As the belt returns to its central position, it automatically returns the idler to its initial position.

The basic value of 0.02 of the coefficient of friction is only applicable to installations used at 70% to 110% of their nominal capacity, equipped with three roll carrying idlers for the upper side of the belt, a 30° side troughing angle, belt speed of about 5 m/s, surrounding temperature of about 20°C, and 108 to 159 mm diameter carrying idlers with ball bearing and labyrinth grease seals, together with idler spacing of 1.0 to 1.5m for the carrying side and 3 m for the return side of the belt.

Read More:   4 Types of Belt Conveyor Layout - Which Option Is Right For Your Business