Whether gravity or motorized, these belt conveyor types are frequently used to transport bulk or unit loads regularly or periodically, unidirectionally, from one location to another along a set route. The main purpose of the belt conveyor types of equipment are the conveyance of material with the assistance of the movement of various sections and components of the equipment.

When most people hear the word “conveyor,” the first thing that comes to mind is “conveyor belt” for them.  Conveyor belts, which are also among the most popular kinds of conveyors, are straightforward in their technique of transporting goods from one place To end place – and they are also cheap in cost.

Some of the Belt Conveyor types are listed below:

In this articles, a few belt conveyor types are explained

The Components of a Belt Conveyor

(a) Conveyor belts are a kind of belt that is used to transport goods. 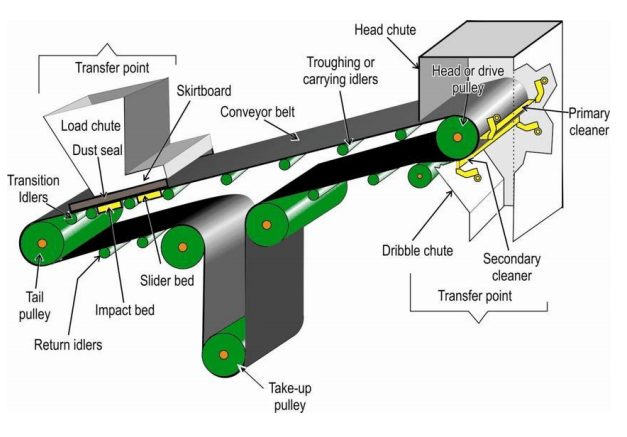 A belt’s active side as well as its return side are supported by idlers, which are rollers that are spaced at certain intervals along the belt’s length. Idlers that are precisely manufactured, firmly mounted, and properly maintained are essential for the smooth and effective operation of a belt conveyor types.

Construction of the idler:

To make idlers, steel tubes complying to IS 9295:1983, which have been evenly machined all over their outer diameters and at both ends of their inner diameters, are often used. All of the tubes are supported by anti-friction bearings that are attached on a fixed steel spindle. In order to allow for fast installation in slots in the idler structure, the spindle ends are flat cut to standard specifications. Heavy steel tubes may be used for the idlers under harsh service conditions (such as in the material loading section), or cast iron may be used in corrosive environments (handling coke etc.).

In addition, at each of the two ends of a belt conveyor types, a big diameter pulley is placed against which the belt rotates and changes direction. These pulleys are referred to as terminal pulleys or bend pulleys.

Belt conveyors are typically driven at the head end pulley, which is where the material is released from the conveyor.

It is necessary to tighten the endless conveyor belt after it has been threaded over the full length of the conveyor in order to provide adequate frictional force between the driving pulley and the belt in order to move the belt.

For free flowing material, a chute may be used to transport it straight from a hopper, bin or storage pile to a receiving area, with the rate of delivery regulated by a regulating gate located at the hopper / bin output.

For a variety of causes, such as eccentric loading, material adhering to the belt or idlers, and so on, the belt may tend to wander off of the center line, which is especially problematic for long-center conveyors. It is necessary to employ belt training idlers in order to avoid this propensity since they automatically maintain belt alignment.

The structure that supports the pulleys and idlers is made up of channel stringers of appropriate size that are connected to the main structure or floor by supporting legs.

The direction of a long-center conveyor is changed at a transfer terminal, which is where materials from one conveyor are moved into another conveyor, in a long-center conveyor. When compared to the first conveyor, the second conveyor is set out at a particular angle (usually 90°). The discharge from the first conveyor occurs at a higher position, and the materials are guided to the second conveyor, which is located at a lower height, via a transfer chute that is appropriately formed and proportioned for the job. 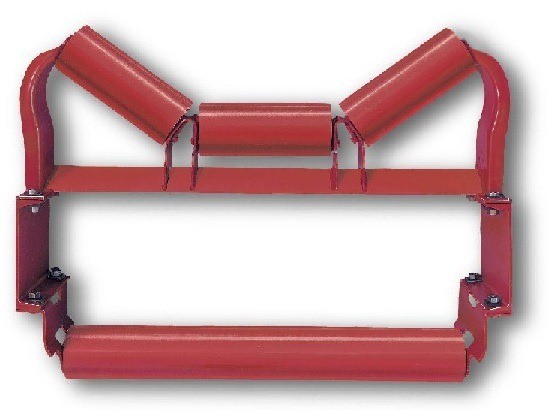 The development of robust technology to assist in the design of conveyor systems, as well as advancements in design optimization and a better knowledge of the dynamics that exist in conveyor belts while in operation, have propelled troughed belt conveyors into a wider range of applications and higher conveying capacity.

Read More:   The 4 Best Types Of Belt Drive (A Complete Comparison) | Everything You Need To Know About A Conveyor Belt System

Uninterrupted, rubberized flat belts are hung between pulleys at each end of a troughed belt conveyor’s length and supported throughout its whole length by a series of revolving idler rollers. It is typically a head pulley that drives the belt, and it is a sliding pulley that maintains the tension in the belt that is connected to a gravity take-up unit that drives the belt.

An apron-loading chute loads material onto the conveyor from the tail end, and it is carried along its carrying side to the head end, where it empties into a discharge chute that directs the product to the downstream equipment.

It is necessary to have impact idlers installed at the loading point to sustain the belt when a load is dropped down the loading chute and hits onto the belt. The return belt, which is directed back to the tail pulley by return idlers, is used to release the material from the carrying belt once it has been unloaded from it.

There is a distinct difference in the spacing between the impact, carrying, and return idlers. The mass of the belt plus the load carried on the carrying side is larger than the mass to be sustained on the return side, and as a result, the idler spacing is chosen in accordance with the tension in the conveyor belt. It is thus necessary to construct the’sag’ in the belt between the carrying and return idler sets on the basis of the highest weight that will be transported by the conveyor.

It is possible to integrate snub pulleys into the design of a conveyor system in order to enhance the angle at which the belt is wound around the driving pulley. As the belt travels around the drive pulley without slipping, the higher wrap angle of the pulley enables for more power to be supplied into the system. Thus, on longer conveyors or conveyors carrying heavy conveying loads, fewer drives are required.

Transverse flexibility or rigidity of the belt is another significant consideration. It is important that the belt trough properly. The empty conveyor belt must make sufficient contact with the center roll in order to track properly.

Troughed belt conveyors have a wide range of applications.

Troughed belt conveyors are widely utilized in the bulk materials handling sector, and examples of applications where this kind of conveyor is frequently employed are given below.

Flat belt conveyor is one of belt conveyor types is that in which the belt runs flat on the carrying side over straight roller type idler or a set of idlers.

Generally speaking, flat belt conveyor systems are utilized for the transportation of all kinds of packing or loose goods. A grip surface for inclines or a low friction quality, depending on the product’s intended usage, may be obtained by finishing the belt with rubber, PVC or other suitable materials. There are a variety of materials available for frame construction, including mild steel with a powder coating or zinc coating, as well as stainless steel and aluminum.

Plastic boxes or cardboard, mattresses, electrical components, coiled wire, waste paper, chemicals, motors, and other items are among the products that are often transported on belts. It is possible to obtain a fixed or variable speed via the use of an externally mounted end drive unit or a motorized drum assembly. In order to provide reversing capability, a centrally placed underslung engine in combination with forward and reverse controls would be used. 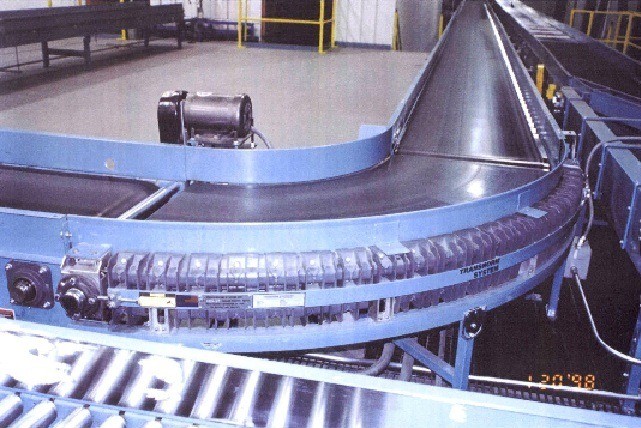 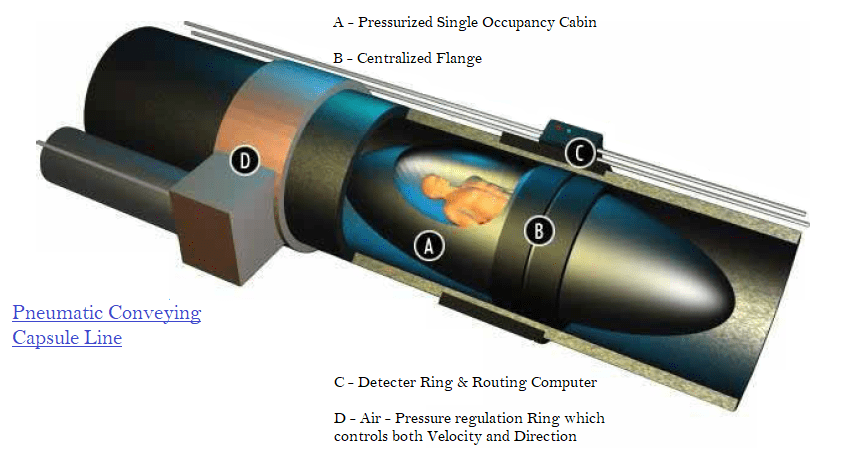 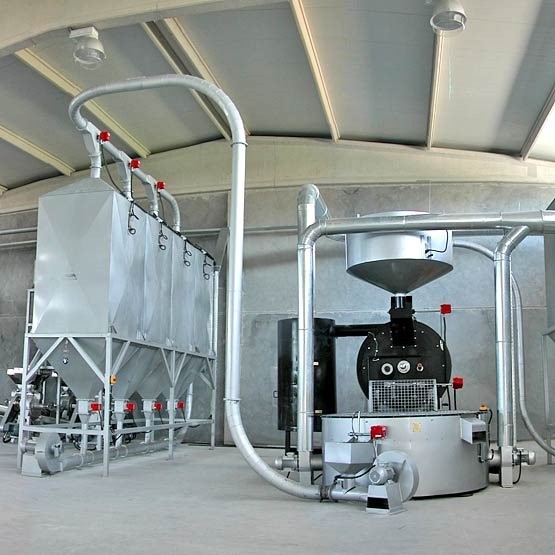 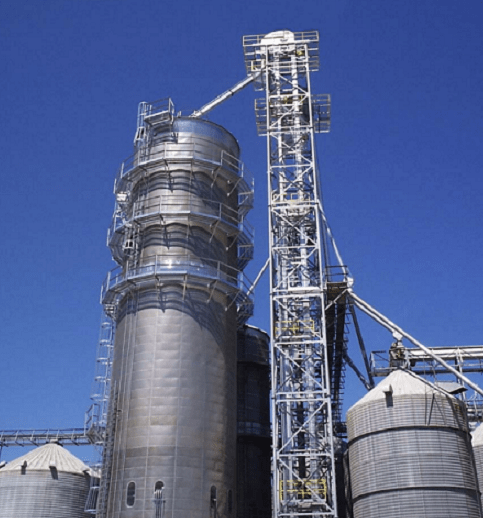