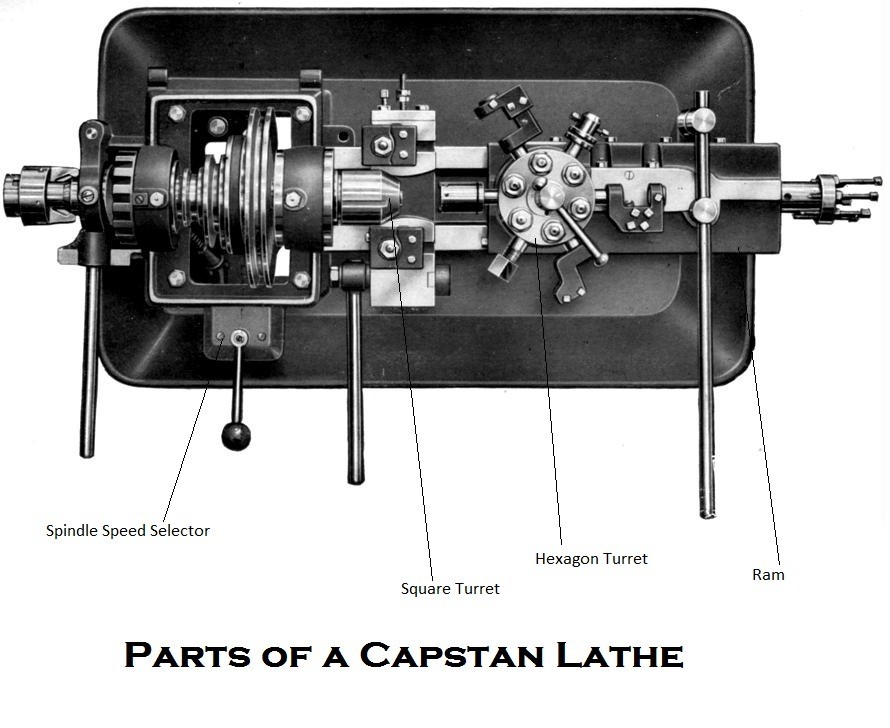 The bed is the base part of the lathe. It is made of cast iron. Guideways are provided on the top of the bed. The cross slide and turret head are mounted on the guideways. The bed should be strong and rigid to withstand load forces and vibrations during the machining process.

The headstock assembly is permanently fastened to the left end of the bed. The headstock of the capstan lathe is similar to that of the ordinary lathe. But it is heavier in construction. A powerful motor with a 30 to 2000 rpm speed is fitted.

The four main types of headstocks are

The turret head is mounted on the ram and fitted with a turret that slides longitudinally on the saddle. The turret head has a hexagonal block having six faces with a bore for mounting six or more tools at a time. The threaded holes on these faces are used to hold the tools. The actuation of the ram is done by hand or power. An adjustable stopper is used to control the forward movement of the ram. The Ram is returned to its initial position in order to index the cutting tool. The tools are indexed to 60 by rotation of a circular plate, which is indexed automatically along with the turret head. A mechanism called the Geneva mechanism is used to bring the next tool into the cutting position. 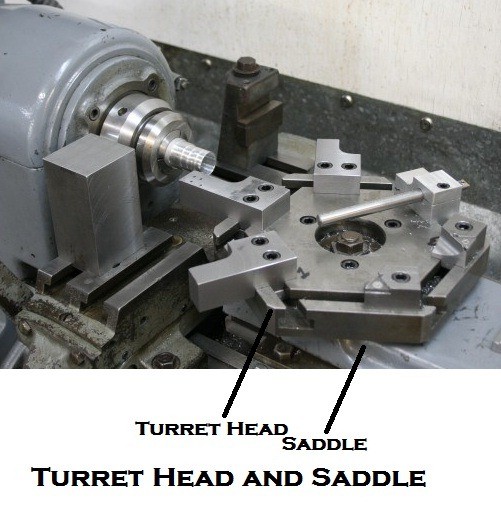 It is an H-shaped component fitted across the lathe bed. It moves along the guideway. It can be moved anywhere along the bed and locked into the required position. In the capstan lathe, the turret head is mounted upon the ram, which slides upon the saddle.

There are two types of cross slides:

The cross slide has two tool posts, giving a total of four faces of the square turret for mounting the tools. Tools are indexed at an angle of 90. While indexing, the motion of each tool is controlled by stop bars.

This type of cross slide is entirely supported on the front and has no rear tool post. This enables a greater swing capacity to hold a large-diameter workpiece.

The workpiece is held in collet or chucks which are actuated hydraulically or pneumatically. All the needed tools are held in the respective holes on the turret head. The tool is moved with the help of the turret head according to the sequence of operations.

After completing each operation, the turret head is moved back to its initial position, which indexes the tools automatically.