Starting an engine in cold weather is somewhat difficult. Choking device makes engine starting easier. The choke valve is butterfly valve, similar to the throttle valve. This valve is situated between the air intake and the venture. 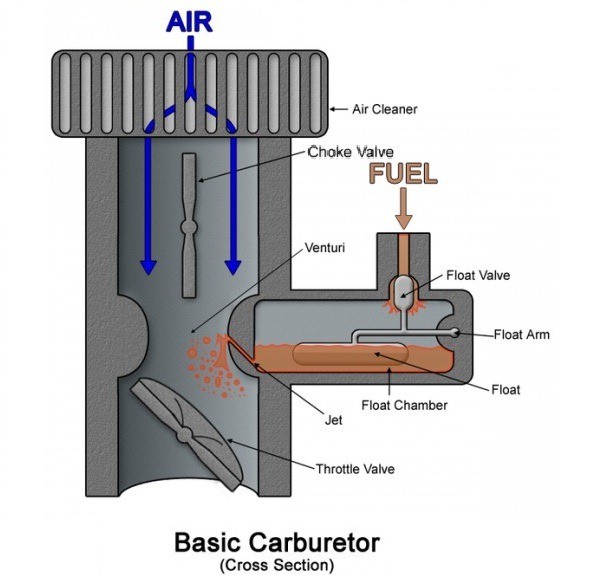 At the time of starting, the choke valve is turned to close almost the inlet passage. This is called choking. Then, during suction stroke, a greater depression is created in the inlet passage and is felt on the fuel jet which is situated at the throat of the venture. This causes more fuel to be ejected by the fuel jet. Choking restricts airflow and provides an over supply of fuel. It should be remembered that only the lighter fractions of the supplied fuel evaporate at lower temperatures and form a combustible mixture in the cylinder. 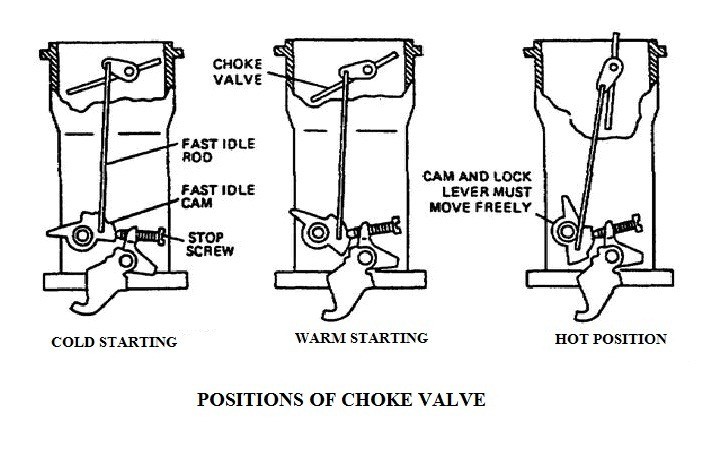 The choke valve may be operated either manually or automatically. Manual choke operation is usually effected by a flexible cable connected to a knob in the dash board/instrument panel. Automatic choking is accomplished by a thermostatic element. The tension of the thermostat spring keeps the choke valve in a nearly closed position. As soon as the engine begins to operate, the exhaust gases heat the thermostat casing. This decreases in the tension of the spring and causes the choke valve to open to wide open position.

During choking, only the lighter fractions of the supplied fuel evaporate and form the combustible mixture in the cylinder. The unvapourized heavier fractions of the fuel mxi with lubricating oil film on the cylinder wall. The contaminated lubricating oil may run down into the crankcase as the piston rings scrape the oil. Thus, the crankcase oil gets diluted. This lowers the lubricating characteristics of the oil and may cause greater wear of the engine parts. It is evident, that during choking, fuel is wasted. Hence, choking should be done only when the engine fails to start and should be limited to the minimum period necessary to realize starting.

Unloader or dechoker If, for any reason during starting period, the engine is flooded, it becomes necessary to clear the excessive gasoline out of the intake manifold. This is accomplished by an arrangement of the throttle lever and chokes lingage. In one arrangement depressing the accelerator pedal to the floorboard forces the choke to open sufficiently to allow the engine to clean out the intake manifold. This device is called unloader or dechoker.

previousPropeller Shaft / Drive Shaft, A Universal joint | 2 Major Types and Functions of the Propeller Shaft
nextParts of Tyre | Structure of a Tyre