In the cone clutch the contact surfaces of the driving and driven members are made as portions of cones. A typical cone clutch is show in the picture 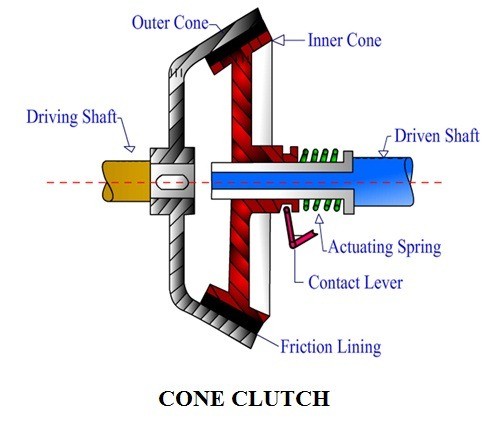 The composite male member is carried on the crankshaft spigot, with a bush provided between them. The male cone member is attached to the gear box input shaft. A spring presses the male cone into the female cone of the fly wheel. The spring reaction is taken through a ball thrust bearing onto the clutch cover plate. The clutch cover plate is bolted to the rim of the flywheel by means of a number of hexagon headed screws.

To disengage the clutch, the male cone is drawn back along the spigot against the pressure of the spring. The faces of the cones are then separated. Now the engine flywheel no longer drives the male cone, and hence the driven shaft, i.e., gearbox input shaft. 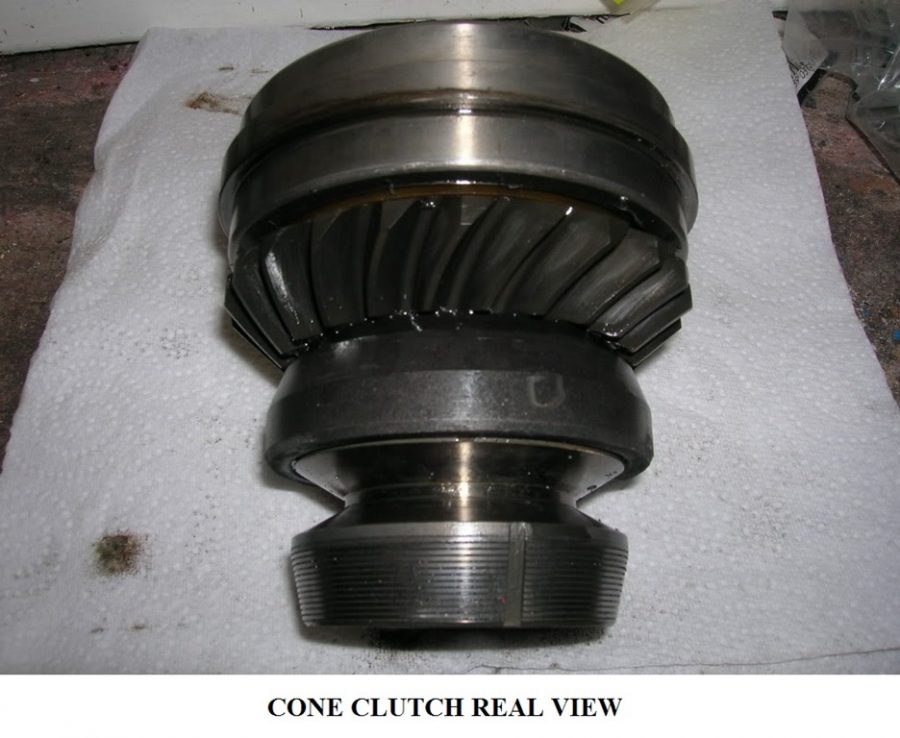 Using cones for the engaging surfaces enables greater torque to be transmitted without having to employ extremely heavy clutch springs.The angle of the cones cannot be made much smaller than about 20°. Because with a very small cone angle, the male cone will bind or stick in the female cone and it will be difficult to disengage the clutch. Further, a small quantity of wear on the cone surfaces will result in a considerable axial movement of the cone.Cone clutches are generally used in the synchromesh mechanisms in constant mesh gearboxes.

The hydraulic clutch is used on vehicle where the clutch is to be remotely located and it may be difficult to run linkages from the clutch pedal to the clutch. 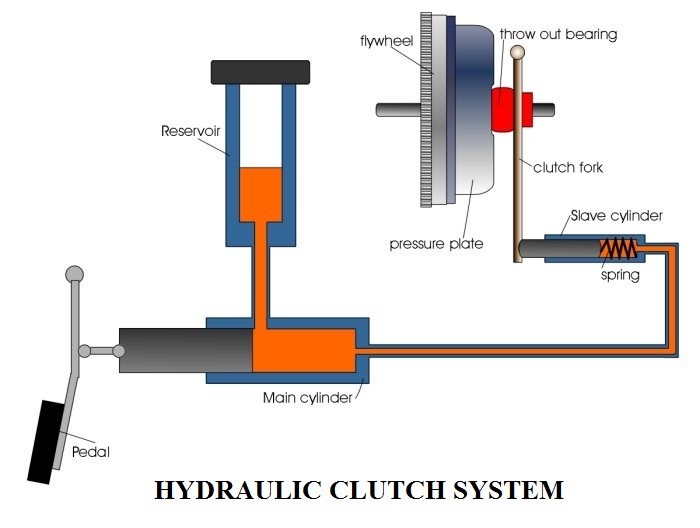 The principle of operation of a hydraulic operated multiple plate clutch. Hydraulic operation of the clutch has become increasingly popular in modern cars and heavy duty trucks.In this system, the clutch pedal operates the piston in the clutch master cylinder. The hydraulic pressure thus created in then transmitted through a tube to the slave cylinder, consisting of the piston i.e. pressure plate. This pressure moves the piston, thus releases the clutch. The main advantages of this system are that complicated clutch linkages, vibration and wear of the linkages are all eliminated.

Read More:   The Hotchkiss Drive | Torque Tube Drive Type Suspension System
Tags:construction and working of a cone clutchconstruction and working of a hydraulic clutchhydraulic clutch system used in motor cyclemale and female members of a clutch.Power transmission by clutches in an automobiletypes of clutches in automobile sysyemtypes of clutches present in a transmission system