Construction and Working of Pistonless Pump

The pistonless pump is similar to a pressure fed system. Instead of having the a main tank at high pressure (typically 300-500 psi) the proposed pump system has a low pressure tank (5 -50 psi). Which delivers propellant at low pressure into a pump chamber, where it is then pressurized to high pressure and delivered to the engine. 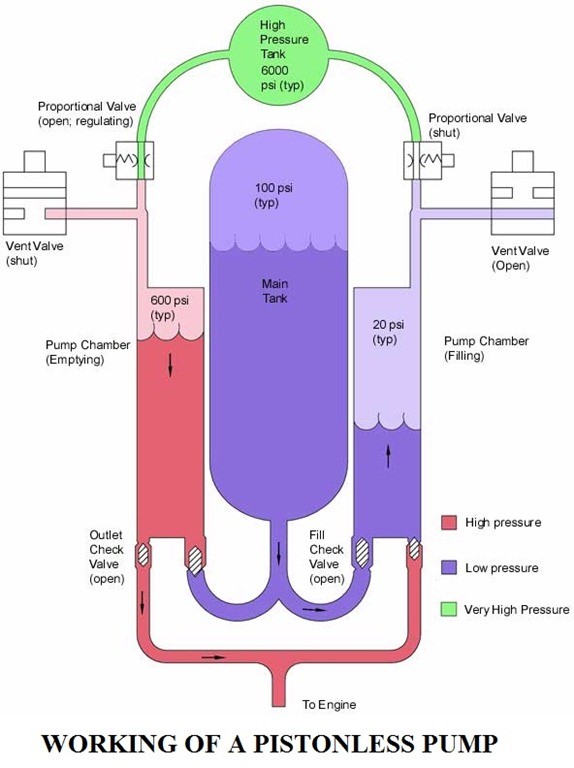 How does a Pistonless pump works

Two pumping chambers are used in each pump, each one being alternately refilled and pressurized. The pump starts with both chambers filled. One chamber is pressurized, and fluid is carried to the rocket engine from that chamber.

(Step 1) the level gets low in one chamber. Then other chamber is pressurized and flow is thereby established from both sides during a short transient period.

(Step 2) until full flow is established from the other chamber. Then the nearly empty chamber vented and refilled.

(Step 3) Finally the cycle repeats. This outcomes in steady flow and pressure. The pump is powered by pressurized gas which acts directly on the fluid. Initial tests showed pressure spikes as the pump transitioned from one chamber to the other, but these have since been eliminated by adjusting the valve timing.

This pump is more robust than a piston pump in that it has no high pressure sliding seals, and it is much less expensive and time consuming to design than a turbo pump and a system which uses the pump has far lower dry mass and unusable residuals than turbo pumps do.

Pump tested with water at 450 psi and 20 gpm, it has been tested 150 psi, and it has been used to pump kerosene at 485 psi and 20 GPM in an Atlas Vernier rocket engine test. Valves and sensors have been specified. Materials and manufacturing processes (standard welding and machining processes) have been identified, and vendors to fabricate such a system have been qualified .

Spacecraft Applications of the Pistonless Pump 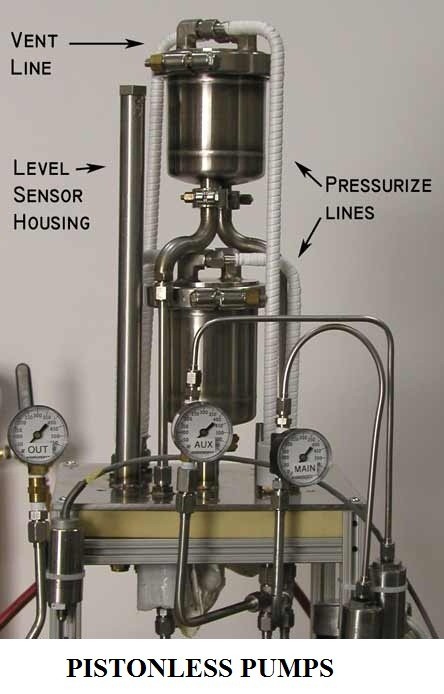 This pump offers substantial performance and flexibility improvements for a space vehicle such as the Crew Exploration Vehicle. Space vehicles currently use spheroidal tanks pressurized to 200-300 psi. These tanks are somewhat heavy and very expensive. It require propellant management devices to keep liquid propellant at the tank outlet for engine starting in a zero gravity environment. The pump allows for lightweight, low-pressure tanks and the pump stopped with one chamber full of fuel so that when the spacecraft starts, the fuel settle to the bottom of the tank and no PMDs are required in the tank. The spacecraft tanks need not be spheroidal, and options such as low pressure drop tanks, flexible composite tanks etc. become feasible.

The low-pressure tanks lifted to LEO empty and then filled from the upper stage, thereby limiting the structural loads on the tanks. Low-pressure tanks more easily connected, and low-pressure plumbing, valves and fittings are lighter, less expensive and more reliable. For lunar and mars missions, fuel pre-positioned by robotic spacecraft at the destination for the return trip. These tanks more easily integrated with the spacecraft. The dangers associated with handling propellant tanks and transferring propellant are lower at low pressures. We imagine a system that utilizes aircraft drop tank style operations.

Since ascent stages from the Moon or Mars need not be streamlined, concepts for use of propellant produced locally on the Moon or Mars may benefit from fiber reinforced external flexible bladder tanks. This will reduce delivered vehicle size and mass.

The pump works well at flow rates from zero to full flow. So it can be used to provide pressurized propellant for altitude control / landing rockets / main engine burns. Because the flow and pressure decoupled the pump uses no pressurant at zero flow. The pump vented to a low pressure. So as to reduce loads on propellant valves with seals subject to creep or degradation for long.