Dampers in Suspension System is a revolutionary way to improve the performance of your vehicle. Dampers are used to absorb vibration in different types of machines. The dampers are held in position by means of main springs. In a vehicle suspension system, springs alone are not satisfactory and sufficient. It must be remembered that the spring characteristics must be compromise between flexibility and stiffness.

Spring must be flexible so that if can absorb road shocks. But if it is too flexible, it will flex and rebound excessively and repeatedly, giving a rough ride. A stiff spring will not flex and rebound so much after a bump has been passed. But, it will give a hard ride because it will transmit too much of road shock to the vehicle. In practice, by using a relatively flexible or soft spring, and a damper, a satisfactory smooth ride can be achieved. 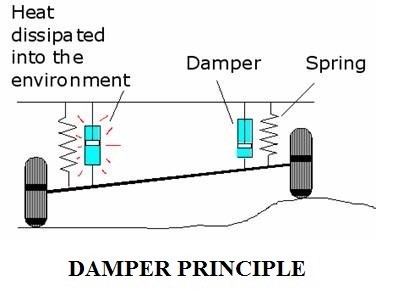 In a bumpy road and especially on a curve, the oscillations of the vehicle frame might become serious enough to cause the driver to loose control of the vehicle. The damper dampens out the spring oscillations quickly once the wheel has passed the hole or bump in the road. The damper is also called shock absorbed by many.

The spring energy is converted to heat which is dissipated partly by the friction of the system, but mostly by the dampers.

What is a Dampers in Suspension System?

Dampers are nothing but a piston in a cylinder filled with oil or gas. The damper’s function is to restrain undesirable bounce of the sprung vehicle mass and to restrain the wheel assembly from loosing ground contact by being excited at its natural frequency.

If a compressed spring is released, it will continue to oscillate back and forth through several gradually diminishing cycles until all the energy is dissipated. This process could provide a very disturbing and dumpy ride. Properly tuned damper will allow a compressed spring, when released, to extend slightly beyond its natural length or shape, then return to rest. This is called critical damping.

In most applications, critical damping is far too severe and the best damping for comfort and adequate wheel control falls between 15 and 50 percent of the critical value, depending on the inherent system friction and the required ride qualities.

The typical function of the damper in a modern car is to reduce the amplitude of the deflection over a bump to about a fifth of its initial value, within two cycles of oscillations, at the natural frequency of the system.

The independent front suspension assembly with a damper in position can be seen with arrangements can be seen in this picture. 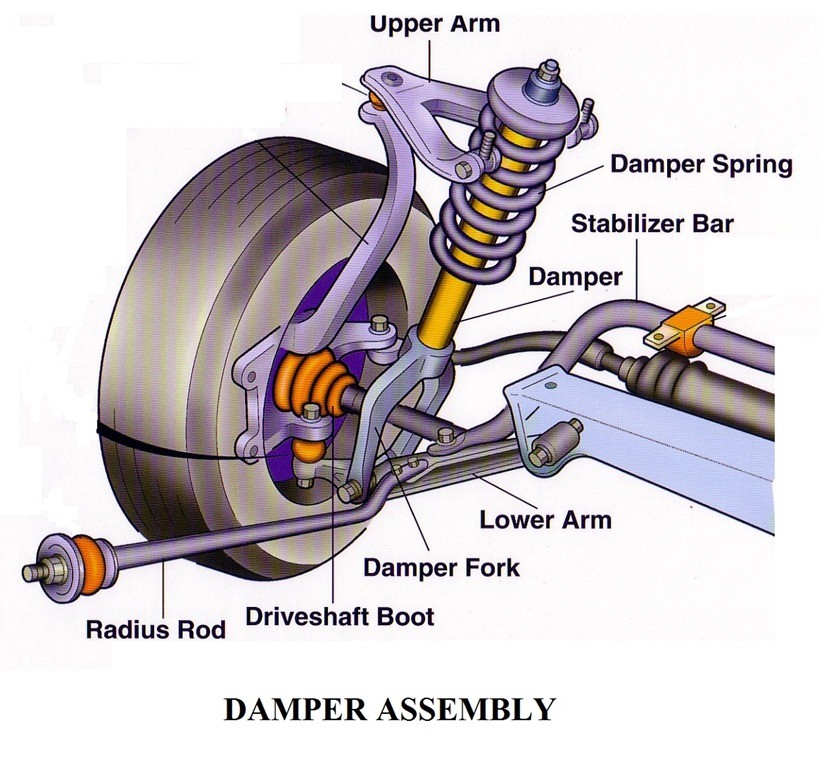