The Failure mode and effect analysis (FMEA) is a tool for identifying potential risks associated with the use of products or services. FMEA is often used in conjunction with fault tree analysis. In simple terms, failure mode analysis is a method of risk assessment that identifies critical components and subsystems in a system. A failure mode refers to a specific way in which a product may fail, while a failure effect describes how the failure might affect the user.

The goal of FMECA is to identify the root causes of failures, understand their effects on people and products, and suggest ways to prevent them.

2) evaluation of each identified failure mode; and

3) selection of actions to be taken to mitigate the identified failure modes.

In order to perform an effective FMEA, it is necessary to first determine what types of failures could occur. There are several methods for determining potential failure modes. One approach is to brainstorm with stakeholders about possible failure modes.

Another approach is to examine existing documentation about the product or service under consideration. Documentation includes design specifications, maintenance manuals, warranty information, test reports, etc. Once potential failure modes have been identified, they should be prioritized according to their severity.

Once potential failure modes have been determined, they need to be evaluated. Evaluation involves assigning scores to each failure mode based on its severity. Scores should reflect both the probability of occurrence and the consequences if the failure occurs. The following guidelines provide some useful criteria for evaluating potential failure modes:

• Probability Score-The probability score reflects the likelihood of a failure occurring. The higher the score the less likely the failure mode will occur.

• Consequence Score-The consequence score reflects the degree to which failure of a given failure mode would adversely affect users. Again, the higher the score, the worse the consequences.

After the failure modes have been evaluated, they need to be selected for mitigation. The action chosen should address the highest-ranking failure modes. If a single action cannot address all of the high-scoring failure modes, then additional actions should be considered.

Failure Mode: A particular way in which an item fails, independent of the reason for failure.

Failure Mode and Effects Analysis (FMEA): A procedure by which each credible failure mode of each item, from a low indenture level to the highest, is analyzed to determine the effects on the system and to classify each potential failure mode in accordance with the severity of its effect.

Indenture Levels: The hierarchy of hardware levels from the part to the component to the subsystem to the system, etc.

Redundancy means having more than one independent means of performing a function.  There are different kinds of redundancy, including:

(1) Operational-Redundant items, all of which are energized during the operating cycle; including load-sharing, wherein redundant items are connected in a manner such that upon failure of one item, the other will continue to perform the function.  It is not necessary to switch out the failed item or switch in the redundant one.

(2) Standby-Items that are inoperative (have no power applied) until they are switched in upon failure of the primary item.

The FMECA was originally developed by the National Aeronautics and Space Administration (NASA) to improve and verify the reliability of space program hardware. 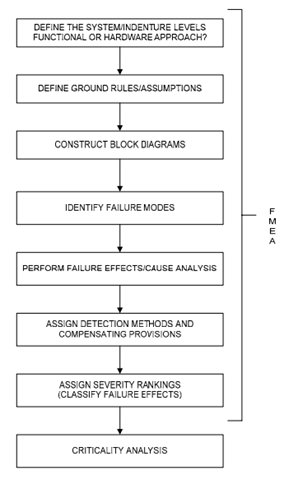 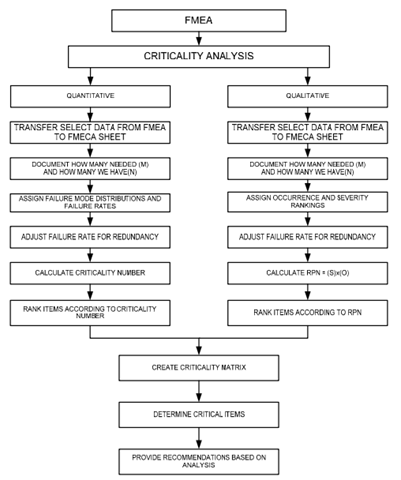 Who is the team?

Areas to be represented are:

The failure mode analysis (FMA) is a tool that helps identify potential risks associated with a product or system. FMA is a systematic method of identifying possible failures and their causes. In order to perform FMAs, we need to first understand what a failure is.

A failure is defined as any undesirable event that occurs during the normal operation of a system.

There are two types of failure:

Design defects are flaws in the design of a product or system that cause it to fail. These may be caused by manufacturing errors, poor quality control, or lack of testing. Operational defects occur due to improper use of the product or system. This could be user error, misuse, or abuse.

There are five different categories of failure modes:

1) Defects in materials, components, or subassemblies;

We then calculate the probability of each failure occurring. Probability is calculated using the formula P = 1-Q where Q is the reliability of the system. Reliability is determined by dividing the number of times the system has successfully operated without failure over its lifetime by the total number of operations performed.