The fuel cell vehicle (FCV) is the nearest thing yet to an “ultimate eco-car” that offers solutions to energy and emissions issues.

FCVs are powered by fuel cells, which generate electricity from hydrogen, which is not only environmentally friendly and highly energy-efficient, but can also be produced using a variety of readily available raw materials. Thanks to these characteristics, fuel cell vehicles are ideal for achieving sustainable mobility. Therefore, Toyota is striving to make this vehicle technology widely available as soon as possible.

What is Fuel Cell technology?

A fuel cell is a device that uses a chemical process to create energy. The fuel cell technology has two electrodes which are located on the anode and cathode sides, respectively, in every fuel cell. The electrodes are where the processes that create electricity take place.

Every fuel cells generally contains an electrolyte that transports electrically charged particles from one electrode to another, as well as a catalyst that speeding up the reactions between the electrodes.

The most basic fuel is hydrogen, however fuel cells additionally require oxygen. The fact that most of the hydrogen and oxygen utilised in generating power eventually mix to produce a harmless byproduct, primarily water, is one of the most appealing aspects of fuel cell technology.

Read More:   Parts of Tyre | Structure of a Tyre 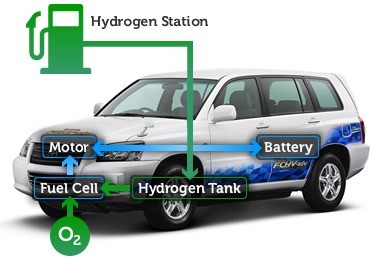 Only a little quantity of direct current (DC) power is generated by a single fuel cell. In practise, a stack of fuel cells is generally constructed. The fundamentals are the same whether you’re working with a cell or a stack.

At a steady cruising speed, the motor is powered by energy from the fuel cell. When more power is needed, for example during sudden acceleration, the battery supplements the fuel cell’s output. Conversely, at low speeds when less power is required, the vehicle runs on battery power alone. During deceleration the motor functions as an electric generator to capture braking energy, which is stored in the battery.

Who is the inventor of the fuel cell technology?

The fuel cell was first discovered in 1839 by Welsh scientist William Robert Grove, but it was not utilised commercially until the 1960s. NASA utilised fuel cells to power probes, satellites, and space capsules as part of Project Gemini, which ran from 1962 to 1966.

There is no heat produced by a fuel cell since it transforms chemical energy straight into electrical energy. With electrons being transferred from the cathode to the anode, the total reaction is 2H2 + O2→ 2H2O.

The features that distinguish this one of the most widely used fuel cells are mentioned here.

On their respective sections of our site, Blogmech.com, you may find more extensive information about each fuel cell type, including history and present applications.

Is it true that fuel cell technology are a superior technology?

When it comes to fuel cells, how long do they last?

The fuel cell stacks are expected to last the vehicle’s lifespan, which is estimated to be between 150,000 and 200,000 kilometres. The fuel cell will then be dismantled and materials will be recycled at the end of their lifespan, similar to the current situation of car components.

What are the reasons that hydrogen and fuel cell technology automobiles are a bad choice?

Electrical shock and the flammability of the fuel are the two main risks of fuel cell and hydrogen-powered cars. Fuel cells produce water (H20) and electrical energy by electrochemically mixing hydrogen gas (H2) and oxygen (O2) from the surrounding air.

Is it possible for hydrogen fuel cells to explode?

Hydrogen, which is utilised in fuel cells, is a highly flammable gas that, if not handled properly, can cause fires and explosions.

Is it possible to make hydrogen fuel at home?

Yes, electrolyzing water may be used to create hydrogen in a science fair-like manner. If you can catch all of the hydrogen in a litre of water, you’ll receive roughly 111 grammes of hydrogen. In a fuel cell automobile, a kilogramme of hydrogen is equal to a gallon of gasoline.

What is the most cost-effective method of producing hydrogen?

Steam reforming is a natural gas-based hydrogen generation method. This approach is presently the most cost-effective way to get industrial hydrogen. The gas is heated to 700–1100 °C inside the presence of steam and a nickel catalyst in this procedure.

How much energy is required to generate one kilogramme of hydrogen?

However, today’s finest water electrolysis systems have an effective electrical efficiency of 70-80%, using 50–55 kWh of power to produce 1 kilogramme of hydrogen (since it has a specific energy of 143 MJ/kg or roughly 40 kWh/kg).

How much power is generated by a hydrogen fuel cell?

One fuel cell generates around 0.5 to 1 volt of energy, according to the US Department of Energy. China is the world’s greatest producer of hydrogen gas. China produces 22 million tonnes each year, or one-third of the global amount.

What is the most efficient fuel cell technology?

Alkaline Fuel Cells are a type of fuel cell that uses alkaline ions , which operate between 60 and 70 degrees Celsius (140 and 158 degrees Fahrenheit), are one of the most efficient fuel cells, with up to 60% efficiency and up to 87 percent combined heat and power.

What is the weight of a fuel cell?

Battery-electric trucks are roughly 7,000 to 10,000 pounds heavier than diesel trucks, according to early prototypes. Because they are built for significantly higher working pressure, fuel-cell tanks will be slightly heavier than their CNG equivalents.