The principle of stimulated emission and the quantum-mechanical fundamentals have been presented by Einstein in the year 1917. After the stimulated emission theory, realization of MASER (Microwave Amplification by Stimulated Emission of Radiation) by Towens of Columbia University and Prokhorov and Basov of Moscow University combine receive the noble prize in the field of MASER’s in the period of 1950 – 1964. The major disadvantage of this type of laser wasn’t continuously emitting the microwaves, and the travelling distance also very few distance only covered.

Later in the 1959, the first word “LASER” started spreading. Gordon Gould who was the first person used the word. He was the Doctoral student at Columbia University under the guidance of Towens. He missed to register for the patent, so his technology was exploited by others. Later he realized to obtain the patent in the year 1960, until 1977 he finally win his patent war and he received the LASER patent. This LASER technology also not continuous, it lasted for few milliseconds. 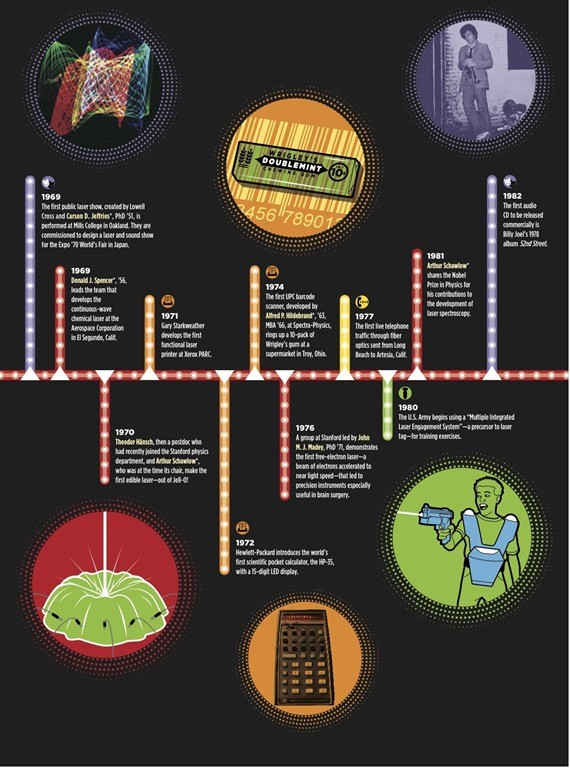 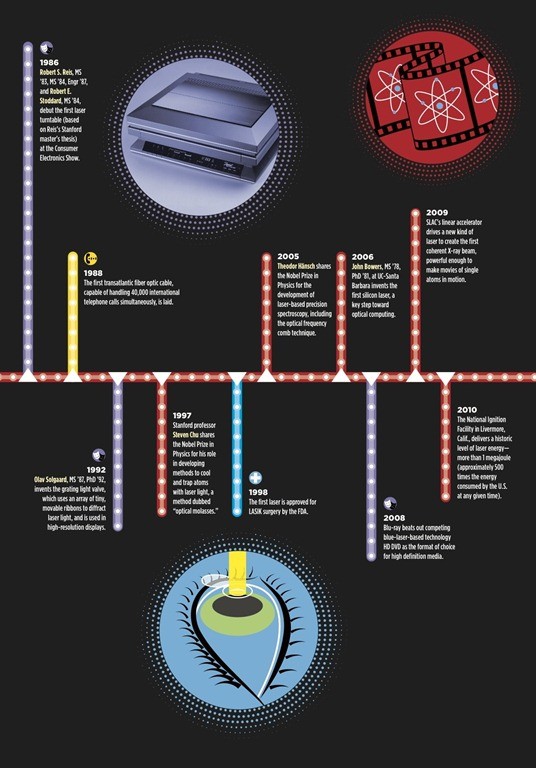 Later in 1960, Theodore Maiman of Hughes laboratory invented the first optical Laser which is also not having continuous output. He used a Ruby laser rod to obtain a laser signal.

Ruby laser is historically the first one to be discovered; It gives laser radiation on a pulsed length (1 nm = 10-9 m). It consists of a ruby rod xenon flash tube, a suitable cavity to reflect the light from flash tube to the ruby rod, and a high voltage power supply to give electrical energy to the flash tube. 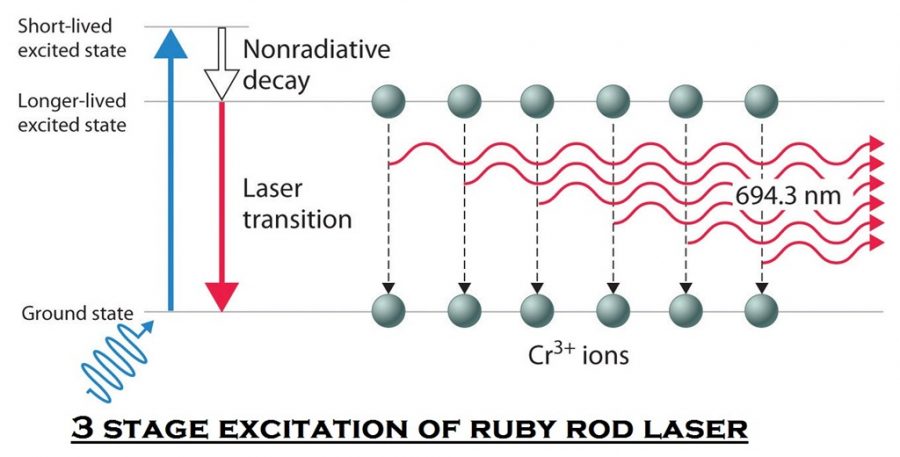 In 1961 first Neodymium Glass laser was introduced by American Optical Company. Nd: Glass laser is an important laser material for high energy applications. Glass is a compound of oxides; the non-metal oxides, such silicon dioxide, phosphorus pent oxide and boron oxides are its main constituents. It is possible to obtain a large variety of properties due to the existence of different metal oxides, which alter the structure in various ways. These components as well as the laser activators are mixed and heated to melt in a furnace when the required laser glass is formed. 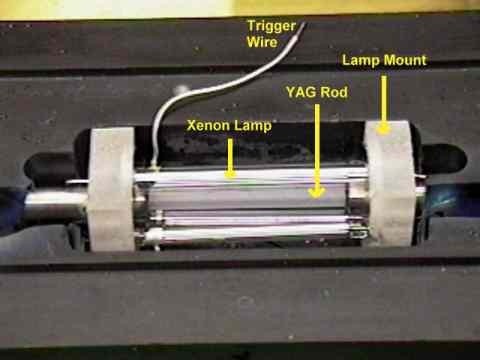 In 1962, first Yttrium Aluminum Garnet (YAG) laser was introduced by Bell Labs. In 1964,Neodymium – doped YAG simply Nd-YAG laser is invented by Geusic & Smith at Bell Labs. These types of laser’s are commonly used in cosmetic applications like Lasik Vision Correction and Skin resurfacing. YAG is formed from a mixed oxide system having a composition of Y3Al5OI2. Using Czochralski method, the crystal is grown in a specially designed furnace by dipping a rotating seed into a crucible of molten material and withdrawing it at a constant speed.

Iridium crucible is used because of high melting point of YAG (1910-1970°C). However, the YAG laser has the advantage of having a relatively high thermal conductivity to dissipate the heat generated, thus allowing these crystals to be operated at high repetition rates of the order of many pulses per second. With a continuous source of excitation like tungsten lamp or krypton arc lamp, continuous laser output of about 1 kW power could be obtained.

Due to these excellent properties, Nd:YAG laser is extensively used in many industrial applications like drilling of holes in solid objects, welding of metals and alloys, etc, and also in medical applications like eye surgery, treatment of cancer, etc.

The gas lasers have a gas or a mixture of gases as their light-amplifying substance. Javan, Bennett and Herriott succeeded in demonstrating the first gas laser towards the end of 1960-a few months after the Maiman’s discovery of the ruby laser. The gas lasers are of continuous type and normally have high coherence. But, they are considerably less powerful as compared to the pulsed solid-state lasers.

Helium Neon laser was the first gas laser which was invented by Ali javan in 1960. This was the first continuous light laser and it’s working on the principle of convert electrical energy to a laser light output. The helium-neon laser is the most widely used of all lasers mainly because it is much cheaper than the solid-state lasers and yields highly coherent radiation required for many applications. This laser is used in surveying, engineering construction, supermarket checkout scanners, printers, holography and many other such applications. 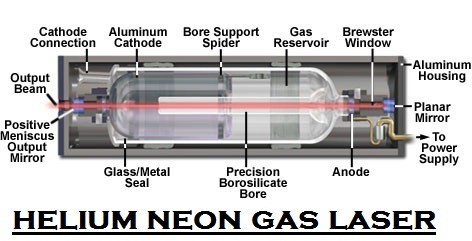 In 1964, Carbon Dioxide (CO2) laser was built by Kumar Patel an Indian Scientist at AT & T Bell labs. This industrial laser is currently used for many applications including welding, cutting, drilling, laser surgery, opto-electronics and many more. It is undoubtedly a very important laser because of its high efficiency and high power capacity. It gives laser radiation at 10.6 micron wavelength in the infrared region. It is a molecular gas discharge with the laser action taking place between two vibrational levels of the carbon dioxide gas. It can be operated in both continuous and pulsed modes. 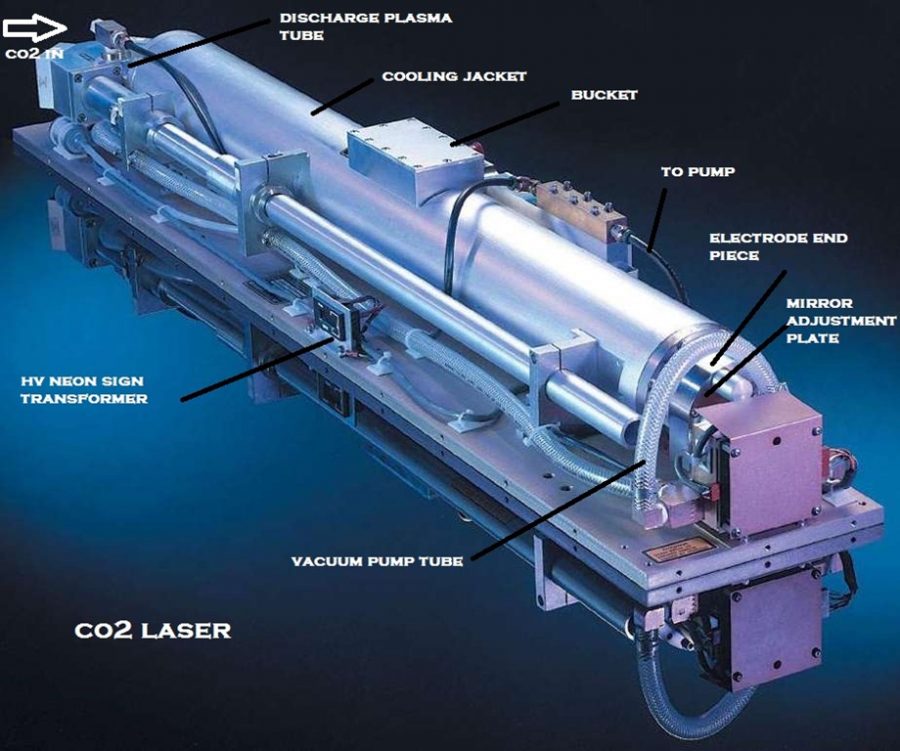