An Introduction to Mechanical Vibrations

What are mechanical vibrations and why are mechanical and civil engineers aware of their effects? Just look at history.  The Tacoma Narrows Bridge opened to traffic on July 1, 1940, and on November 7, the same year, the bridge’s main span collapsed due to high winds. Although the real cause of failure was an aeroelastic flutter, this case is viewed as an example of elementary forced resonance, with the wind producing an outward periodic frequency that mirrored the bridge’s normal structural frequency.

Wind acts as an opposing influence on the bridge, causing it to rotate and oscillate. The resonance catastrophe of the bridge was triggered by this force with a specific frequency (where the wind speed was moderate at 64 km/h). Another tragedy caused by resonance is the demolition of the Broughton Suspension Bridge, which was caused by soldiers marching in lockstep.

The study of Mechanical vibrations

A body is said to vibrate if it has periodic motion. Mechanical vibration is the study of oscillatory motions of bodies. Vibrations are harmful to engineering systems. Sometimes, vibrations can be useful. For example, vibratory compactors are used for compacting concrete during construction work. Excessive vibration causes discomfort to human beings, damage to machines and buildings, and wear of machine parts such as bearings and gears. The study of vibrations is important to aeronautical, mechanical, and civil engineers. It is necessary for a design engineer to have a sound knowledge of vibrations. 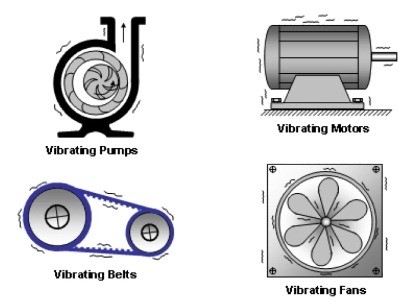 Another broad classification of vibrations is:

Sometimes vibration problems are classified as:

The main causes of vibrations are:

The effects of vibrations are as follows:

1. Unwanted noise
2. Early failure due to cyclical stress(fatigue failure)
3. Increased wear
4. Poor quality product
5. It is difficult to sell a product.
6. Vibrations in machine tools can lead to improper machining of parts