The friction between metal to metal components in machines occurs as a result of moving surfaces, and the machine encounters resistance, slowing its progress. As a result of friction, a significant quantity of energy is released in the form of heat, reducing the overall efficiency of the machine. 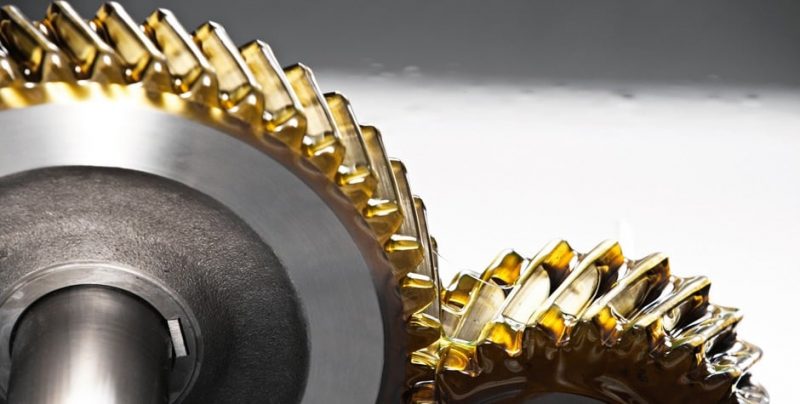 To reduce friction between moving parts so as to reduce 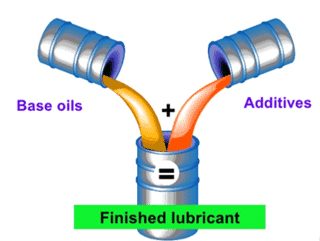 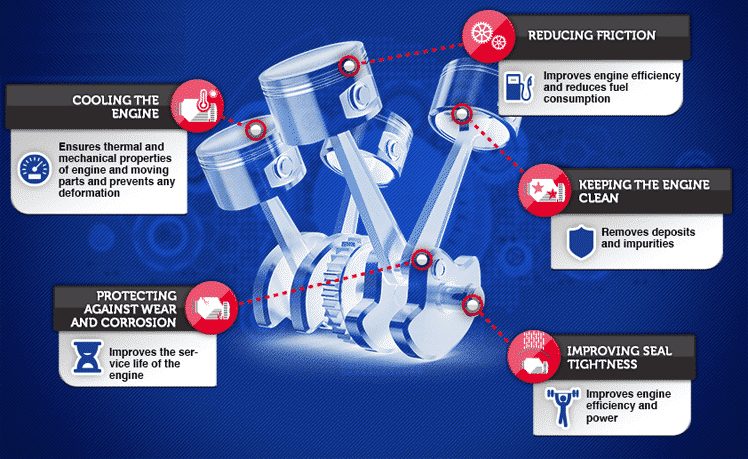 According to the following mechanism, the behaviour of lubrication may be explained.

Because the moving/sliding surfaces are separated from one another by a thick layer of fluid, there is very little direct surface to surface contact and very little welding of junctions in this configuration. It fills in and conceals the imperfections of moving or sliding surfaces, forming a thick layer between them and preventing direct contact between the materials’ surfaces. As a result, there is less friction on the surface. The lubricant selected should have the lowest viscosity possible (in order to decrease the internal resistance between the particles of the lubricant) under operating circumstances, while also remaining in place and separating the surfaces as much as possible.

In the case of thick-film lubrication, hydrocarbon oils (mineral oils that are lower molecular weight hydrocarbons with about 12 to 50 carbon atoms) are regarded to be acceptable lubricants. Ordinary hydrocarbon lubricants are mixed with chosen long chain polymers in order to preserve the viscosity of the oil throughout the year, regardless of the temperature.

This kind of lubrication is recommended in situations when a continuous layer of lubricant is not possible to be maintained. In such situations, the clearance area between the moving/sliding surfaces is lubricated with a substance that may be adsorbed on both of the metallic surfaces by either physical or chemical forces, depending on the application. This adsorbed layer contributes to the separation of the metal surfaces from one another, at least up to the height of the peaks present on the surface of the metals.

Although these oils have a high oiliness, they have the drawback of degrading at high temperatures, which makes them unsuitable for use in cooking. Mineral oils, on the other hand, are thermally stable, and the addition of vegetable/animal oils to mineral oils may increase their oiliness, which is beneficial in certain applications. Other materials such as graphite and molybdenum di-sulfide are appropriate for thin film lubrication.

When the moving/sliding surfaces are subjected to very high pressure and speed, a high local temperature is reached. Under these circumstances, liquid lubricants fail to adhere to the moving/sliding surfaces and may degrade, if not evaporate completely. Special additives are added to mineral oils in order to withstand the high pressures encountered in these applications. Extreme pressure additives are what they are referred to as. On metal surfaces, these chemicals help to create more robust coatings (that are capable of withstanding very high loads and high temperatures).

Organic compounds containing active radicals or groups such as chlorine (as in chlorinated esters), sulphur (as in sulphurized oils), or phosphorus (as in phosphoric acid) are important additions (as in tricresylphosphate). When these compounds come into contact with metallic surfaces, they react to produce metallic chlorides, sulfides, or phosphides, depending on the temperature.

Oil additives are chemical compounds that improve the lubricant performance of base oil. It is possible to find additives in lubricating oils in concentrations ranging from a few parts per million to several percentage points, and based on the function that these products must do, they may be classified as follows:

Classifications of Oil additives are: 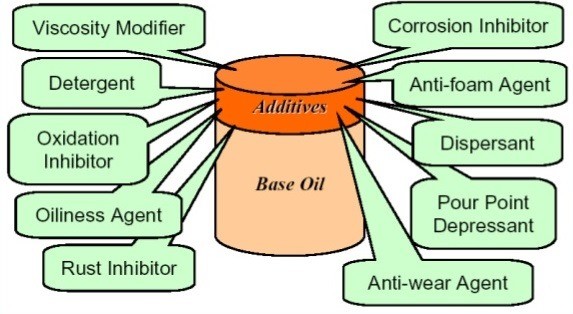 These are lubricants that are liquid in nature. Animal oils, vegetable oils, petroleum oils, and synthetic lubricants are all included in this category.

Semi-solid lubricants are produced by emulsifying oil and fat with thickening agents such as sodium soap, calcium soap, lithium soap, and aluminum soap at a high temperature, and then cooling the mixture.

Using soda as a base:

Here, sodium soaps are used to thicken mineral or petroleum oil, which is a kind of thickening agent. Because of this, they are only minimally soluble in water. They are capable of withstanding temperatures of up to 175°C.

A solution of lithium soaps and petroleum oil is used in this application. They are water resistant and may be used in temperatures up to 15°C.

Specifically, calcium soaps are emulsifying with petroleum oil in this instance. They are also water resistant and may be used up to 80°C. When exposed to higher temperatures, soap and petroleum oil separate from one another.

Solid lubricants are lubricants that are solid at room temperature. Solid lubricants such as graphite, molybdenum disulphide (MoS2), and boron nitride (BN)x are the most often utilized materials. They are used in high-temperature and high-load situations (pressure).

Graphite is a kind of mineral that is found in nature. The most common use for it is as a solid lubricant. It has a layer structure, and the layers are kept together by weak Vander Waals forces, which allow for the simple sliding of one layer onto another. It feels extremely soapy to the touch and is non-flammable. It is used in high-temperature conditions (about 450°C). They may be used either in powder form or combined with oil or water to create a paste.

Molybdenum disulphide (MoS2) is a chemical compound that occurs naturally in molybdenum. It is a sandwich-like structure in which a hexagonal layer of molybdenum (Mo) atom is sandwiched between two hexagonal layers of sulfur, creating a molybdenum-sulfur sandwich. Vander Waals forces, which are weak in comparison to graphite, hold each layer together. It is stable up to 400°C. It differs from graphite in that it is utilized under high vacuum, while graphite is combined with water or oil (as opposed to pure graphite). It clings even more firmly to the metal or other surface than it did before. 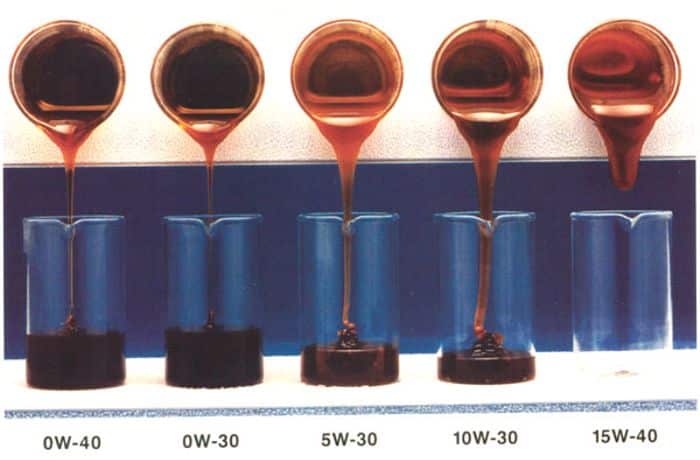 There are Six main methods of applying lubricants: 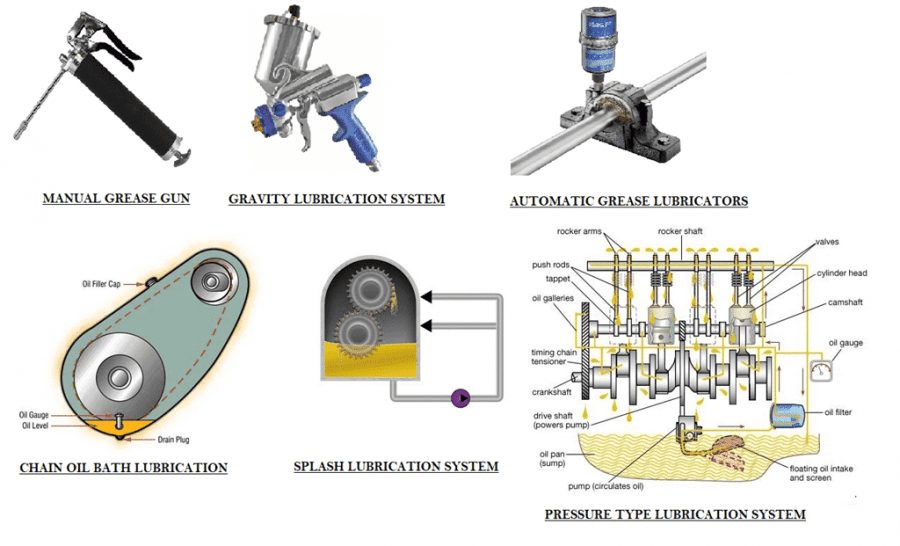 It is the most often utilized type of lubricating, particularly for low and medium speed activities. When placing the oil surface, it is preferable to be able to check the position of the oil surface by utilizing the oil gauge rather than guessing where it should be put on the rolling element.

In this technique, oil supply is regulated by changing the amount of oil drop, and it is often used for tiny bearings that run at a rapid rate.

In order to feed oil to bearings, this technique makes use of a gear or a circular flow ring. A common use for this material is in automobile transmissions or gearboxes.

It is commonly employed when it is required to cool the bearing components of a machine that rotates at a fast rate or in an environment with a high ambient temperature. Oil is supplied into the system via the feed pipe and collected through the recovery pipe, which is then cooled and re-fed. To prevent back pressure from developing in the oil within a bearing, the recovery pipe’s diameter should be greater than the feed pipe’s diameter.

In high-speed revolution bearings, it is extensively employed, and oil is jet-sprayed into the inside of the bearing via one or more nozzles under continuous pressure into the bearing’s interior. According to general rule, the jet stream speed must exceed 1/5 of the circumferential speed of the inner ring outer surface because the air wall produced by surrounding air rotating with the bearing has the tendency to decrease the jet stream in general. Assuming that the total amount of lubricant remains constant, the larger the number of nozzles, the smoother and more significant the cooling effect becomes.

Spray lubrication is a technique of lubricating a bearing that vaporizes the lubricant by forcing air into the bearing before spraying it into it. It has the following advantages.
– Because of the tiny amount of lubrication needed, its whirling resistance decreases, making it ideal for high-speed revolution bearings with low whirling resistance.
– Because it reduces the amount of lubricant that is released, it may also reduce the amount of pollution that is generated by the equipment.
– Because new lubrication is continuously supplied into the bearing, the bearing’s life may be prolonged. Thus, it is extensively used in a variety of machining applications.

When lubricating oil reaches its cloud point, the temperature at which it begins to look foggy is referred to as cloud point.

The lowest temperature at which lubricating oil becomes semi-solid and stops to flow is referred to as the pour point of the oil. It shows the appropriateness of lubricants when they are utilized in a cold temperature. Low pour point is an important characteristic of a good lubricant.

The fire point of a fuel is defined as the lowest temperature at which the vapour of that fuel will continue to burn for at least 5 seconds when an ignition source is placed close to the fuel. The difference between fire point and flash point is about 10°C. 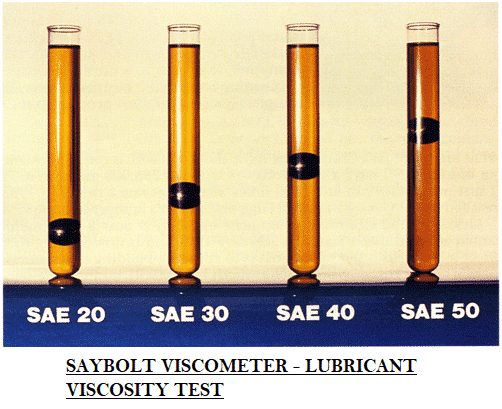 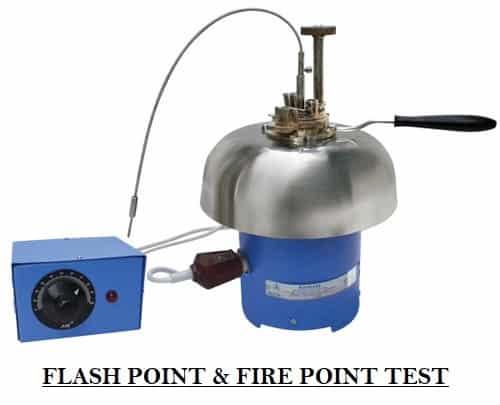 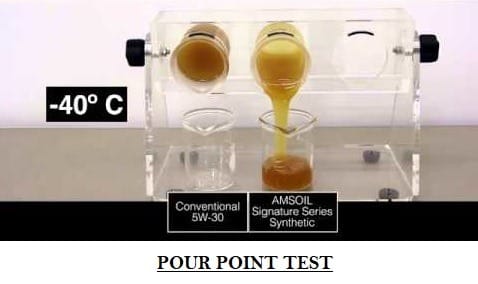 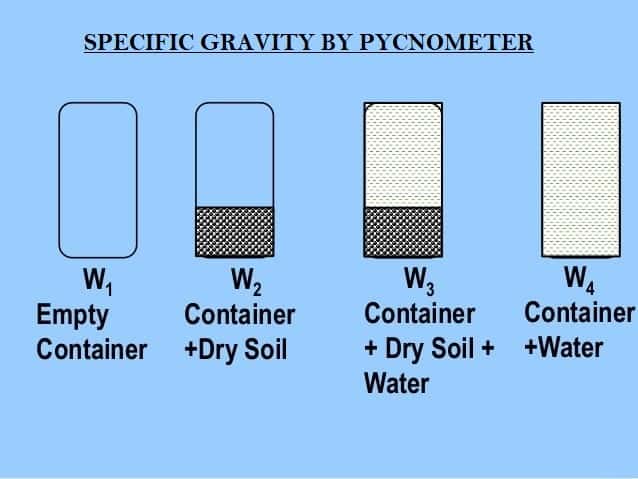 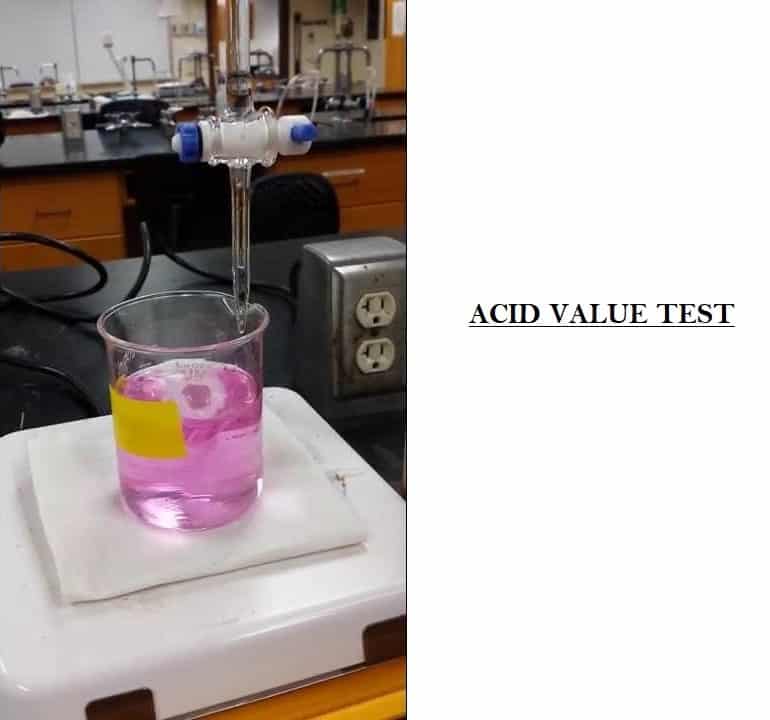 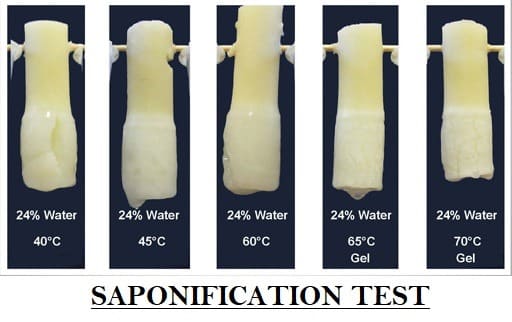 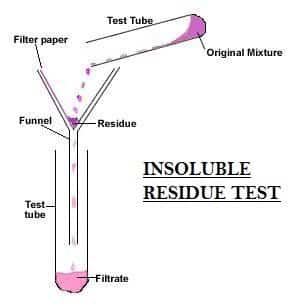 Sources of Oil consumption in the engine: 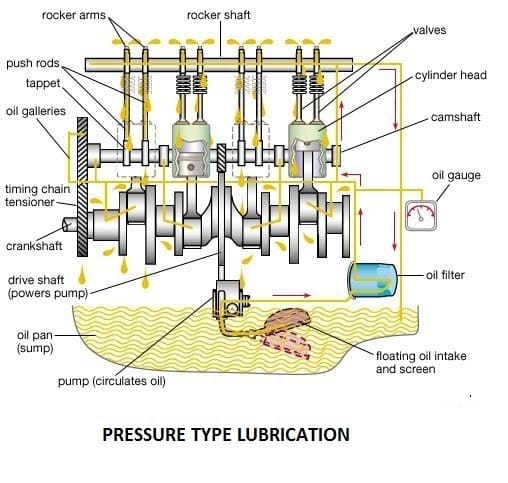 Components of pressure system of lubrication: 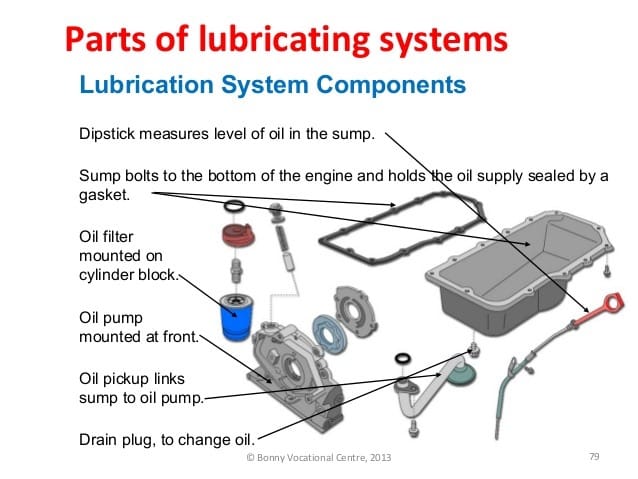 Lubricants are used in a variety of applications

1) Lubricants are mainly used to decrease friction between two surfaces that move relative to one another.
ii) Anti-rust and anti-corrosion agents
iii) It is used in the soap and paint manufacturing sectors.
iv) Liquid lubricants are utilized in the production of medications.
v) Lubricants are also utilized as cutting fluids in the metalworking industries, such as cutting, grinding, and drilling.
vi) Anti-wear, antioxidant, and anti-foaming agents are some of the functions of these compounds.