The term “machine vibration” refers to the movement of parts of machines or systems due to their design. This phenomenon occurs at a frequency higher than the human hearing range. If you’ve ever felt vibrations from moving vehicles, machinery, or heavy equipment, then you have experienced machine vibration firsthand.

Vibrations occur everywhere around us and affect our lives in ways big and small. From the way we move to the way we eat, to the way we sleep, there are many ways vibrations impact our day-to-day activities. In this article, we’ll discuss the various types of vibrations and how they affect our health.

Almost all machine vibration is due to one or more of these causes:

Imagine a boat anchored in a bay. Waves are slapping the sides of the boat, and as long as the waves continue to act on the boat we would expect the boat to rock.  The boat would be rocking because the waves would be exerting a repeating force on the boat – a force of a pattern repeated over and over again.

Repeating forces in machines are mostly due to the rotation of imbalanced, misaligned, worn, or improperly driven machine components. Examples of these four types of repeating forces are shown below. 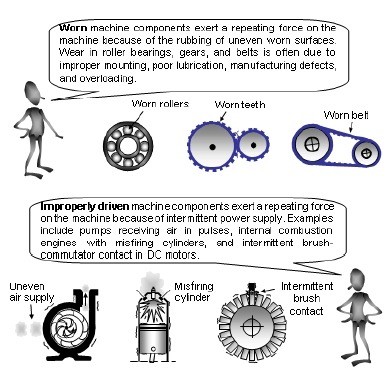 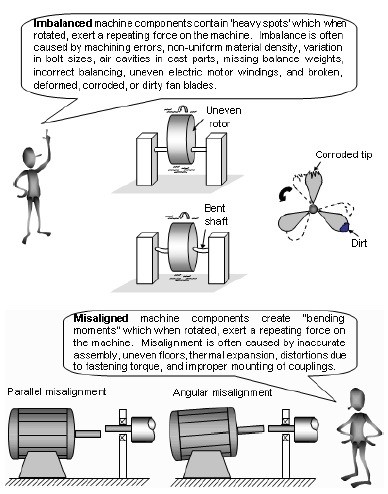 Looseness of machine parts causes a machine to vibrate. If parts become loose, vibration that is normally of tolerable levels may become unrestrained and excessive.

Imagine a child swinging freely on a swing, that is, without the child propelling himself or anyone pushing him. If we observe the motion closely we will see the child swinging at a particular rate. For example, we may see that it consistently takes him three seconds to complete one cycle of swinging.

In general, the more complex the machine, the more natural oscillation rates it has.

Now consider again the child on the swing. If we aided the swinging motion by repeatedly pushing the child, we would expect the child to swing higher and higher over time.

We would however only cause the child to swing higher and higher if we pushed with the right rhythm. If our pushing rhythm is such that he is sometimes pushed down while he is ascending, we would not expect him to swing properly. To make him swing higher and higher, our pushing rhythm would in fact need to be in harmony with his natural oscillation rate.

For example, we could push him every time – or every alternate time – he reaches his highest point. Only by pushing the child at a rate which is in harmony with his natural or preferred oscillation rate can we cause him to quickly swing higher and higher.

What happens if a machine is ‘pushed’ by a repeating force with a rhythm matching the natural oscillation rate of the machine? A similar situation will arise – the machine will vibrate more and more strongly due to the repeating force encouraging the machine to vibrate at a rate it is most natural with. The machine will vibrate vigorously and excessively, not only because it is doing so at a rate it ‘prefers’ but also because it is receiving external aid to do so. A machine vibrating in such a manner is said to be experiencing resonance.

A repeating force causing resonance may be small and may originate from the motion of a good machine component. Such a mild repeating force would not be a problem until it begins to cause resonance. Resonance, however, should always be avoided as it causes rapid and severe damage. For example, whole bridges have collapsed due to their natural oscillation rates being excited by the mere rhythm of soldiers marching in unison across the bridges.