NDT X ray testing is a process that is used to identify and evaluate discontinuities or defects in materials or assemblies. The term NDT stands for non-destructive testing. This type of testing is often used in the manufacturing and aerospace industries. NDT X-ray testing can be used to detect a variety of different flaws, including cracks, porosity, and inclusions.

NDT is an acronym for Non-Destructive Testing. NDT methods are used to test the properties of a material or component without causing any damage. There are many different NDT methods, but the most common are X-ray testing, ultrasonic testing, and magnetic particle inspection.

When you need to have a part of your body cast, a radiography test is often required. This is a test that uses x-rays to create an image of the inside of your body. It can help to ensure that the cast is fitted correctly and will provide the best possible support for your injury or condition.

Castings are made of different metals and by various methods. Sand molded castings often have more surface irregularities than casting produced by metal mold and investment methods. Knowledge of various casting processes and casting defects helps effective radiographic evaluation. The major defects in castings and weldments are given below:

Gas porosity become visible as round or elongated soft shady spots, taking place individually or in clusters or distributed throughout the casting. This is caused by gas formation during solidification by evaporation of moisture or volatile material from the mold surface. Insufficient core baking, venting or entrapment of air in the cope surface of the casting before complete solidification could also be the cause. The term ‘gas porosity’ is used to refer to shady dark spots on the radiograph, whose diameters are usually within 0 to 1 mm. 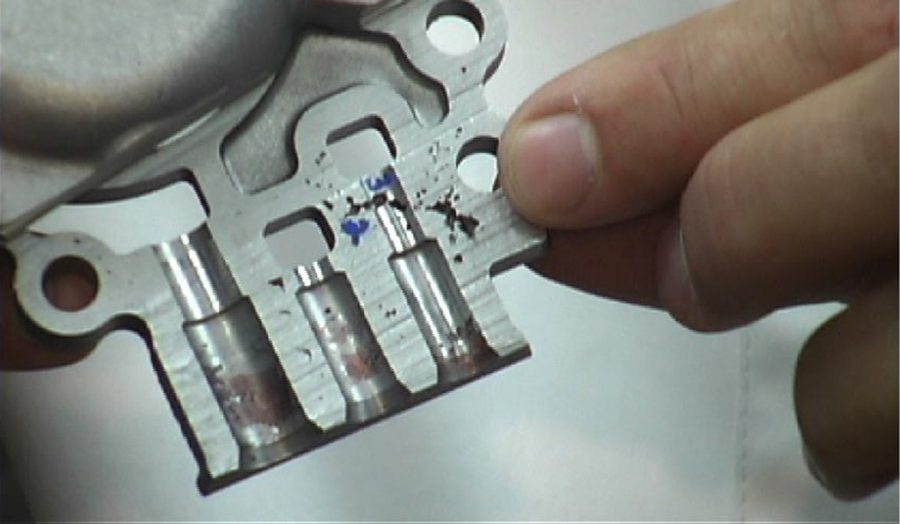 Gas holes appear as dark circular images, isolated or in clusters. Gas holes are caused by gas trap in molten metal. Suppose the molten metal solidifies in the casting before all gases escape, it results in gas entrapment producing gas holes. 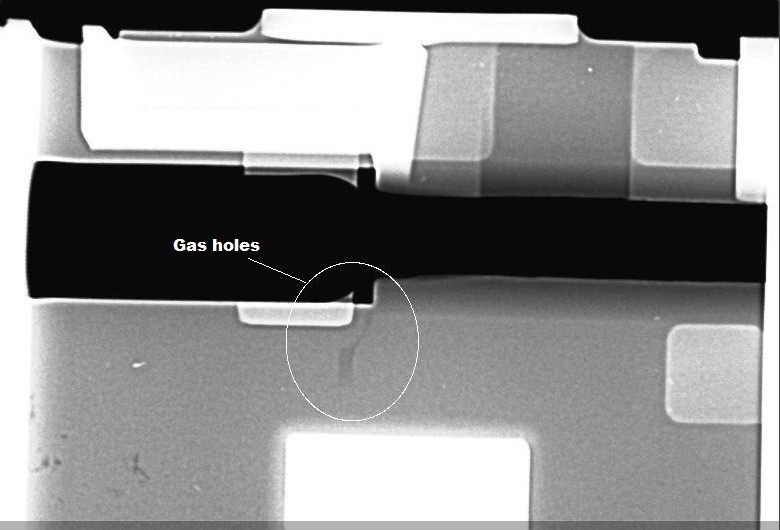 These appear as an overall mottled appearance in aluminum alloy castings, and dark streaks or a spongy appearance in magnesium alloys. These are very fine cavities, usually around the grain boundaries. This defect occurs in casting when overall metal shrinkage is more than the normally expected shrinkage factor. The defect is due to improper feeding of the molten metal and occurs when the pouring temperature is higher than the ideal temperature.

Shrinkage appears as dendrite, filamentary or jagged darkened areas. These are caused due to contraction of metal while the casting solidifies. This defect usually occurs when there is change in section thickness of the casting and non-uniformity of temperature at different thicknesses. 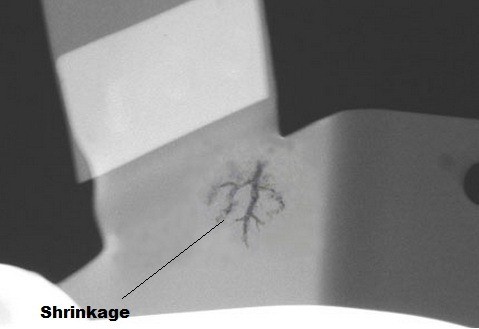 These occur as hot tears or cold cracks (also called stress cracks). Hot tears appear as rugged dark lines of variable width and numerous branches with no definite line of continuity. Hot tears occur during or immediately after solidification. Cold state cracks shows generally as a continuous single narrow, sharp dark line all over the length. Such cracks take place whereas internal stresses are found out by a thermal gradient. 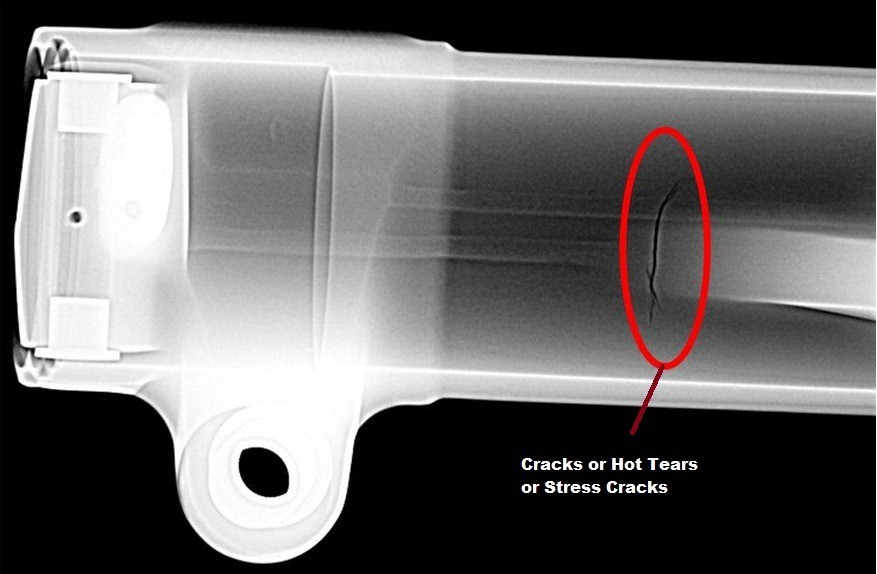 Dross appears as a dark, round or irregularly shaped images due to slag filling up the void entrapped in castings. These may look lighter if the density of inclusion is more than the density of the parent material. Inclusions may be due to slag, sand or oxides. 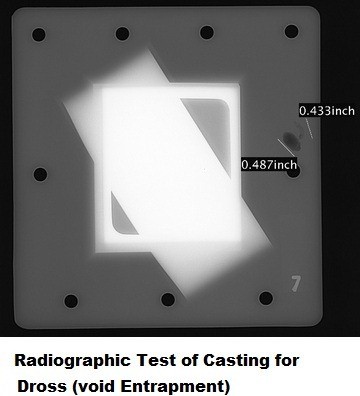 Cold shut appears as a dark line of variable length with a definite, smooth outline. Cold shuts are formed when two streams of molten metal flowing from different directions fail to unite. The creation of a cold shut is due to slow pouring, interrupted pouring or pouring the molten metal at too low temperature. 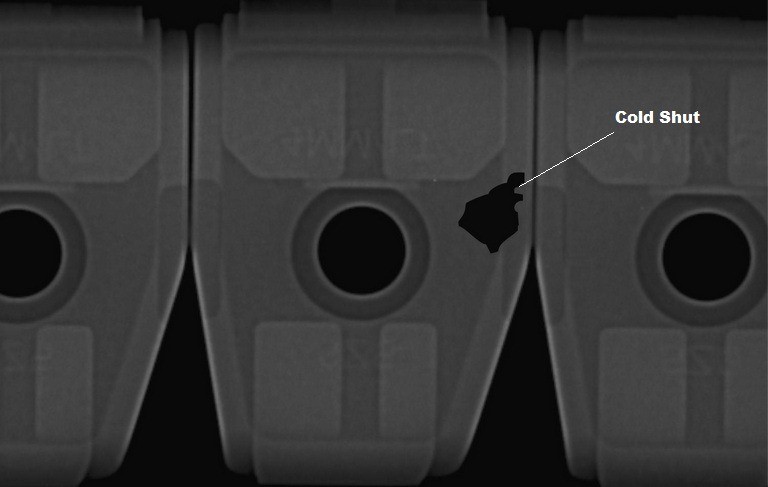 Segregation appears as lighter or darker patches on the radiograph depending on the density of segregated constituents of the alloy. During the melting and casting processes, certain constituents of the alloy may separate from the alloy. This local concentration of the constituents results in a difference in densities on the radiograph, provided the density of the segregated portion is different from the density of the casting alloy. It is possible to have local segregation, in which shrinkage or a hot tear are filled with segregate. The terms used for such indications are shrinkage segregation and sealed hot-tear, respectively.

Misruns seem as a major darkened space of variable dimensions with a distinct, smooth outline. Misruns are produced by failure of the molten metal to completely fill a section of casting leaving the region void. This could occur as a result of lack of fluidity or pouring at too low a temperature.

Diffraction mottling appears as a spurious image on the radiograph and isn’t a casting defect. This mottling effect appears as star shaped representation in case of austenitic steel or in aluminum alloys. This effect of visualization are caused by the diffraction of radiation by the crystals of the metal. The mottling appearance vanishes if the radiograph is taken at a slightly changed angle of incidence.

Diffused chaplets are small bars with end plates used for maintaining the portion of mould core. These chaplets normally ruse with the casting. If not fused, these appear on the radiograph as darks, smooth lines conforming to the shape of the chaplet. This is caused by pouring the metal at too low a temperature to fuse the chaplet.