In this post, we focus on vibrating and oscillating conveyor systems and their categories, designs, and applications. Manufacturers can transfer material from one area to another and fulfill the task in a number of different ways.

Conveyor transportation technology has been designed for moving various types of goods, whether they are solid, semisolid, or sometimes liquid, and a number of conveyor systems are available to suit these requirements.

This article is designed to help people concerned with conveyors determine whether the vibrating/oscillating conveyor meets their requirements and to help customers learn their alternatives. 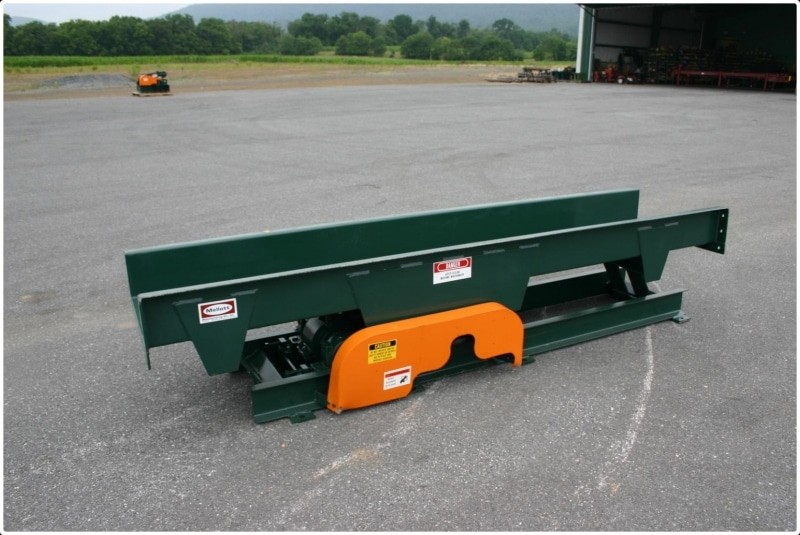 Nowadays, vibratory conveyor technology is used in a wide variety of industrial applications. It is a necessary component of production and assembly lines since it transports components to locations for processing or assembly.

Today, mining, metallurgical, and processing facilities, as well as another primary engineering, are unthinkable without such equipment. Vibratory conveyors are often used in groups and are an integral component of automated manufacturing and assembly operations.

The widespread use of vibratory conveyors or oscillating conveyors in industrial facilities has resulted in attempts to enhance their performance and remove associated issues. Much work is spent on optimizing geometrical parameters, which are dependent on a variety of variables, including the mechanical characteristics of the carried particles, their size, the friction between the conveying surface, and the conveying element’s frequency of oscillation.

Conventional transport devices are typically defined by the object being transported moving continuously along the conveying element (carrier), whereas vibratory conveyors subject the transported objects, components, or bulk material to a periodic motion with the primary component of the transport way being free of contact with the carrier.

The amplitude and frequency of conveying components are clearly critical factors for a conveyor’s proper operation and output. In addition to these variables, the angle of the direction vector of the conveying element’s oscillatory motion relative to the primary direction of the items carried, or to the horizontal plane, must be defined. The elevation is the term used to describe this angle.

For linear conveyors, induction motors with exciters are often utilized. In practice, a value between 15° and 35° is used for the elevation angle. This range is based on empirical data. The greater the angle, the lower the excitation frequency that must be selected.

Vibratory conveyor designs include the following:

Vibratory conveyors’ conveying components are often configured as pipes, cylindrical or conical drums, or rectangular channels. Due to the simplicity and dependability of this kind of construction, the carrier’s guiding mechanism relative to the frame or inertia is often built as a parallelogram.

Leaf springs or helical springs are often used to connect the conveying element to the frame or inertia. The inertia mass is resiliently connected to the carrier on one side and to the frame on the other.

This is often used to impart a desired motion to the conveying element or to minimize the transfer of unwanted vibrations to the frame and surrounding area. Additionally, tuning stability is a concern when using an inertia mass.

The frames of vibratory conveyors and oscillating conveyors are typically welded or cast and are often supported by rubber springs with reasonably high stiffness. In certain instances, frames are attached to the floor by stiff connections, such as screw anchors. No rubber sprigs are used in these instances.

Excitation is accomplished via eccentric motors or electromagnetic vibration exciters. External vibration exciters are rotors that are naturally unbalanced and may be linked to either the conveying element or the inertial mass.

Typically, an electromagnetic oscillation exciter is attached to energize a spring. The split core is connected to the inertial mass on one side and to the conveying element on the other. 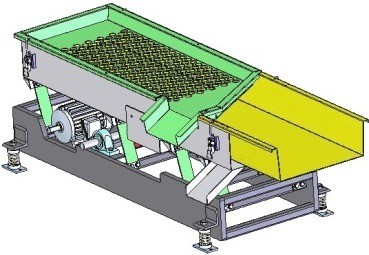 The oscillating motion of the trough is achieved via specially designed inclined arms and an eccentric shaft driven by a motor through V-belts. The eccentric shaft is mounted on anti-friction bearings and has V-pulleys at both ends with weights on them to counteract the unbalancing force. The rotation of the eccentric shaft provides a forward and backward motion to a connecting arm attached to the trough through a rubberized pin.

The trough motion is predominantly horizontal with some vertical component, which causes it to oscillate with a pattern conducive to conveying material. A retaining spring assembly at the back of the trough absorbs the shock load. All components including the drive motor are mounted on a rigidly constructed base frame.

In vibrating conveyors, there are three major drive mechanisms: cranks/springs, weights revolving, and electromagnets. Crank or spring-type conveyors are turned by a motor that has a four-bar mechanism, which transmits an elastic force causing sinusoidal movement.

The very same objective is achieved by revolving weights and electromagnets, but by rotating eccentric weights and rotating magnetic fields respectively. The benefits of any one drive mechanism over another are quite varied since they are all shown to be successful and depend greatly on the application conditions and the working environment. 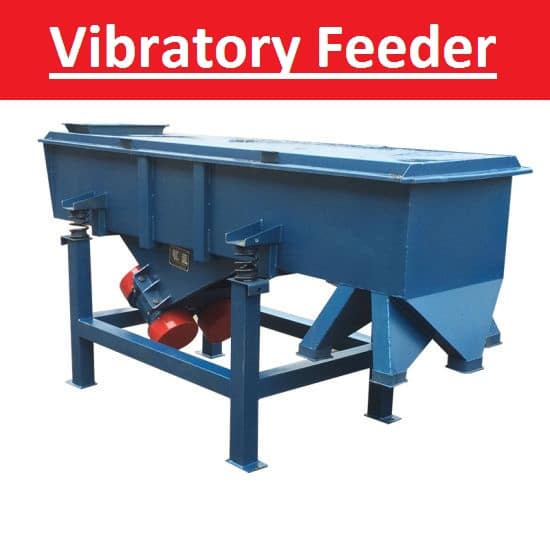 When it comes to continuous weighing applications, these vibratory feeders are particularly helpful since they can handle higher volume rates than other feeder types. They find use in a variety of sectors, including the chemical, food, hardware, and manufacturing industries, among others.

Oscillating conveyors are often referred to as a particular form of vibrating conveyor when they work at a relatively low frequency and a greater range of motion than would be normally used with a vibration conveyor.

This means that oscillating conveyor systems are utilized for the transmission of bulk commodities such as in the wood or waste management/recycling industries. These conveyors, for instance, can be used to carry wooden scraps upstream and transfer them to an outlet.

Advantages of the Oscillating Conveyor System:

· Hot and abrasive materials can be handled

· Cooling, drying, and dewatering operations can be done during transport.

· Scalping, screening, or picking can be done.

· Units can be covered and made dust tight.

· Can be made leakproof

Disadvantages of the Oscillating Conveyor System:

· Limited capacity, about 350 tons per hour for a length of conveying of 30 m.

· Some degradation of material takes place.