An air operated brake system or pneumatic braking system is employed predominantly in medium and heavy duty trucks, because of the following advantages.

1. The pressure of the pre compressed air allows practically any force required for braking to be developed with a very small effort applied by the driver to the brake pedal.

2. The compressed air can also be used to inflate the tyres, drive the windshield wiper, actuate steering gear booster, open and close doors in buses etc.

3. An air operated brake is the most dependable and convenient device for braking full trailers and semitrailers.

The simplest air brake system consists of an air compressor, a brake valve, series of brake chambers at the wheels, unloader valve, a pressure gauge and a safety valve, and an air reservoir. These are all connected by tubes.

The air compressor operated by the engine forces air at a pressure of 9-10 kscm, through the water and oil separator to the air reservoir. The air pressure in the reservoir is indicated by a pressure gauge. The reservoir contains enough compressed air for several braking operations. From the reservoir the air is supplied to the brake valve. As long as brake pedal is not depressed, brake valves stop the passage of air to brake chambers and there is no braking effect. 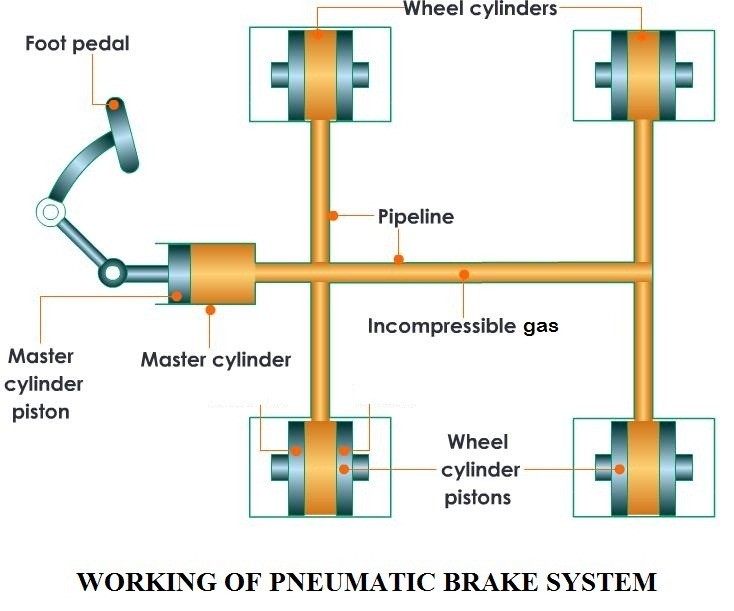 When the brake pedal is depressed, the brake valves varies its position and compressed air is admitted into the wheel brake chambers. In the chambers the air acts upon flexible diaphragms, move4s them the pushes out the rods connected with the levers of the brake gear cams. The cams turn and separate the shoes thus braking the wheels.

When the brake pedal is released, the supply of compressed air is cut off from the brake chambers and they are connected to the atmosphere. The pressure in the chambers drops, the brake shoes are returned to their initial position and the wheels run free.The brake valve is equipped with a servo mechanism which ensures that the braking force on the shoes is proportional to the force applied to the pedal.Besides the valve imparts a relative reaction to the movement of the pedal so that the driver can sense the degree of brake application. 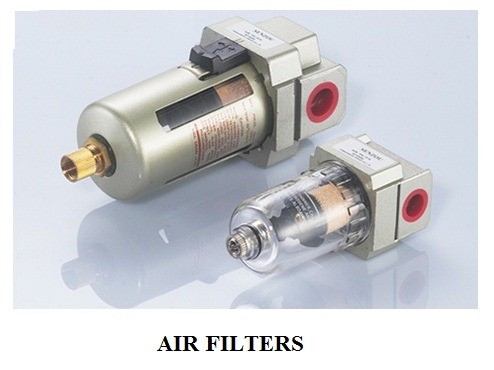 Air filters are used in the air pressure system to prevent particles of foreign matter from entering the operating system airlines or equipment. These are mounted on the chassis and have drain plug to allow the condensate to be easily removed.

The function of the air reservoir is to store the compressed air so that there will always be an ample supply available for immediate use in brake operation. It provides storage of sufficient compressed air to permit several brake applications even after the engine has stopped and just restarted. It also provides a space where the air is heated during compression might cool, and oil and water vapours condense.

An electro pneumatic switch is also incorporated in the circuit. This switch operates in conjunction with the brake valve the stop light, by completing the stop light electrical circuit when brake is applied.