PRINCIPLE PARTS OF A SHAPER MACHINE

The different parts of a shaper machine are given and described below. 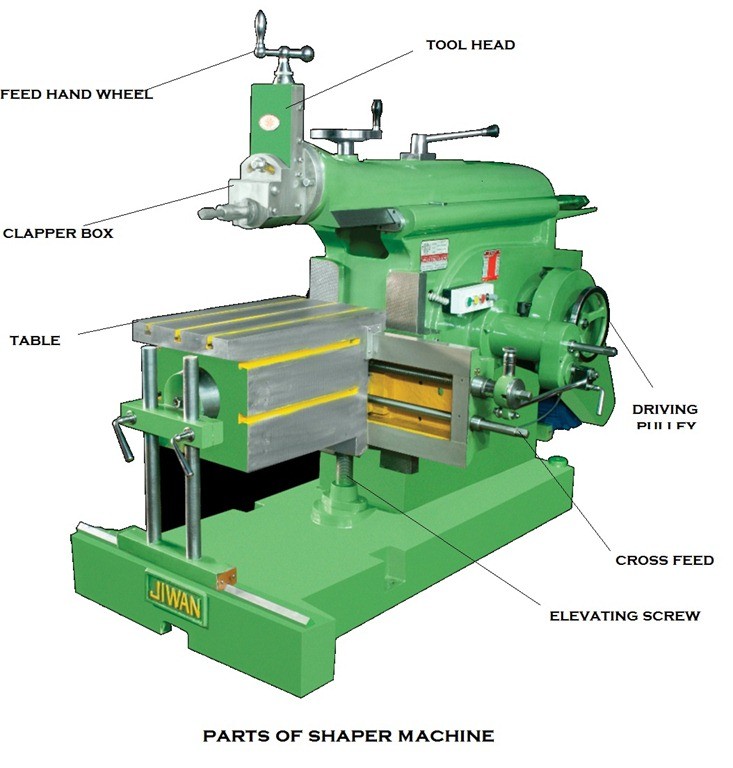 The base is a heavy and robust in construction which is made of cast iron by casting process. It is the only part to support all other parts because all parts are mounted on the top of this base. So, it should be made to absorb vibrations due to load and cutting forces while machining.

The column has a box type structure which is made of cast iron. The inside surface is made as hollow to reduce the total weight of the shaper. It is mounted on the base. The ram driving (Quick return) mechanism is housed. The two guide ways are supplied on the top. The ram reciprocates on the supplied guide ways. Similarly, there are two guide ways at the front vertical face of the column to move the cross rail along these guide ways.

It is also a heavy cast iron construction. It glides on the front vertical ways of the column with two mechanisms. One is aimed at elevating the table and the other one is for cross travel of the table. A saddle slides over two guide ways already provided in the front face of the cross slide. The crosswise movement of the table is obtained by cross feed screw and the vertical movement of the cross rail is obtained by an elevating screw.

It is attached on the cross rail which holds the table in position on its top without any shake.

It is also a box type rectangular hollow cast iron block. This table slides along the horizontal guide ways of the cross rail. The work is held in the table. The table has machined surfaces on the top and sides of T-slots for clamping work. It can be moved vertically by the elevating screw. An adjustable table supports the front face of the table.

Ram of cast iron has cross ribs for rigidity. Generally, it is a reciprocating type which slides over the guide ways on the top of the column. It is linked to driving mechanism of any one and also it carries the tool head at the front end.