Screw conveyors were used as low-height lift pumps to irrigate the lands. It comprises of an inclined rotating casing with an internal helical screw thread, called flight. When such a casing is rotated with its lower end submerged in water, the water entrained in the pockets, formed by the pitches, is raised. The performance of such screws is limited by the angle of inclination of the casing. 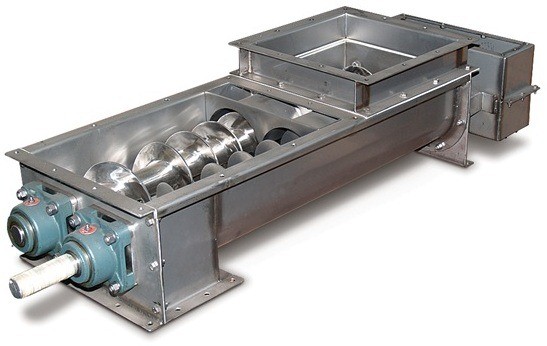 A modified version of such screws have been tried with a rotating shaft having helical screw thread moving inside a stationery casing for lifting fluids like sewage sludge. But due to various limitations the process achieved limited success in the field of transportation of liquid. However when a rotating screw shaft in a stationery casing is used to convey solids, it has commendable success.

What Archimedes invented early in history remains one of the best most flexible methods accessible to processors for transferring materials in a confined environment. Moreover, Archimedes’ screw serves as the basis for systems that transport a wide variety of goods, ranging from dry as well as free-flowing to moist, sticky, and viscous. Although it may move items horizontally, vertically, or at an incline, the vast variety of configurations, components, and construction materials available on this conveyor allow it to handle even the most difficult materials and application requirements. Due to its flexibility, screw conveyors are the most frequently used mechanical bulk solids conveyors on the market.

Essentially, bulk materials are fed into the screw conveyor via the bottom of the housing, where they are sheared and moved ahead with each rotation, bringing the product closest to its desired location. A conventional screw conveyor comprises of flights placed on a pipe inside an enclosed housing, which is supported by bearings. Although U-shaped housings are the most popular, some applications may necessitate the use of tubular troughs. One or more screw pieces may be used in an installation to cover the required distance. Hanger bearings hanging from the top of the trough may hold numerous screws between each segment of a longer conveyor.

Increasing the pipe diameter or allowing the screws to ride in a specific liner placed in the housing are the two additional methods of covering greater distances without experiencing excessive deflection. The screw conveyor’s intrinsic architecture allows for the provision of numerous input and discharge locations, if necessary, depending on the application.

Screw conveyors are completely covered with trough covers to ensure the safety of the operator and the containment of material. The most successful method of obtaining a tight seal on a screw conveyor is to use a flanged cover fastened on 12-in. (or closer) centers in conjunction with a high-quality compressible gasket between the trough and the cover. Gasket material is offered in two colors: black for normal applications and white for hygienic applications such as chemical, food, and other sanitary environments.

The cover is made of stainless steel or carbon steel to match the materials used in the trough’s construction; the thickness of the steel used in the cover, as well as its turned-down edges, offer stiffness, which improves the cover’s capacity to close the trough. Thick coverings that offer extra stiffness may be required for situations that are very dusty.

Industries which uses a Screw Conveyors

There are numerous applications, including numerous ones in the chemical manufacturing industry, that necessitate the use of screw conveyors with specialized configurations and structural materials in order to reduce maintenance requirements, operating costs, and the incidence of sudden and unexpected equipment failure.

Floor mill industry was probably the first to employ horizontal screw conveyor to convey corn and flour. These screws were made by fitted wood blades to a central shaft rotating inside a cylindrical casing. Even now such screw conveyors enjoy popularity in agro based industries, handling grains and flours, because of low friction, negligible cohesive strength of the material. 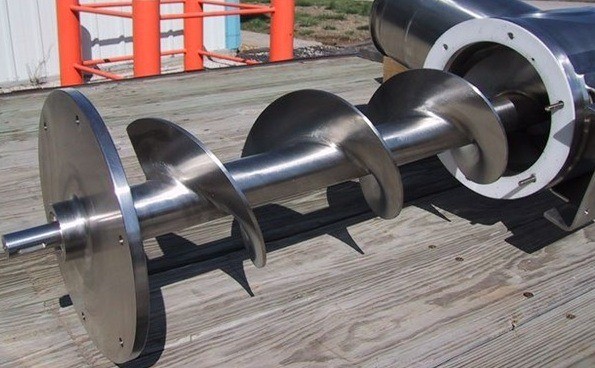 Screw Conveyors consists of a steel tube in the design of a U – shape. For transporting to the discharge stage, two or more tubes may be joined together.

A screw conveyor consists essentially of a shaft mounted screw rotating in a trough and a drive unit for running the shaft. The material is moved forward along the axis of the trough by the thrust of screw thread or flight. The trough is usually of the U-shape.

A helical blade is attached to a drive shaft which is coupled to a drive unit. The shaft is supported by two end bearings and intermediate bearings. The U-shaped trough has a cover plate with an opening for loading the conveyor. A discharge opening is provided at the bottom of the trough. The loading and discharging points can be located anywhere along the trough. More than one feed hopper and discharge hopper may be fitted according to the necessity.

Evaluating the demand load based on the material properties and choosing the right screw conveyors (trough, pipe, flights, shafts, bearings, and motor – driven controls) is critical for an accurate screw conveyor design. A screw conveyor that has been correctly built and constructed should be able to meet the demands of any demanding application for many years.

Screw conveyors, like many other kinds of rotating equipment, need precise alignment in order to operate well and for an extended period of time. The most straightforward method of checking alignment is to use a string. Fasten the string line to one end of the screw conveyor at the trough-end centerline, and then draw the string line tight to the other end of the screw conveyor to complete the installation. The misalignment of the trough portions will be seen as a result of this.

The screw conveyor’s whole length must be aligned, both horizontally and vertically, to ensure proper operation. Every five feet, you should use a measuring tape to check for misalignment in both the horizontal and vertical directions. In the horizontal direction, taking a horizontal measurement from the string line to the edge of the trough reveals that the screw conveyor is out of alignment in that direction. In a similar vein, measuring the distance between the string line and the bottom of the trough flange yields the vertical misalignment.

Each horizontal and vertical measurement should be documented. The relative discrepancies in the measurements show how far each trough section has to be moved in order to ensure appropriate alignment with the others. 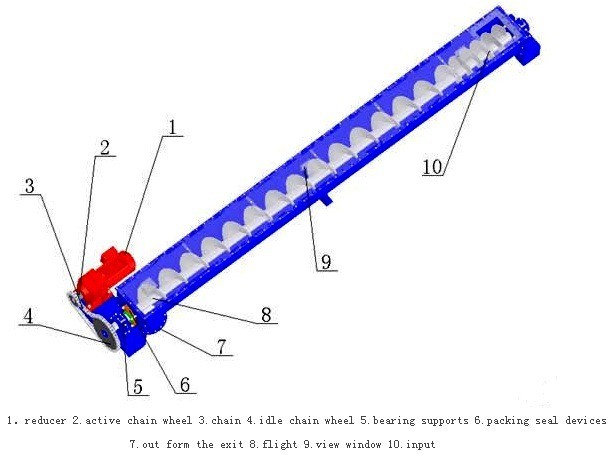 The principle of material movement along the trough is similar to the sliding motion of a nut along a rotating screw when the nut is not allowed to rotate. The weight of the material and the friction of the material against the wall prevent the load from rotating with the screw.