Introduction To The Torsion Bar Suspension System In Automobiles

What Exactly Is a Torsion?

Torque, twisting couples, and twisting moments are all terms used to describe the twisting of a bar.

Each cross-section of a circular shaft stays flat and undistorted when the shaft is exposed to torsion. When this occurs, the bar is said to be in pure torsion.

When noncircular (ex. square, rectangular, etc.) (non-axisymmetric) shafts are exposed to torsion, the cross-sections of the shafts are deformed.

Why Are Torsion Bar Suspensions Not Utilized in Two Wheelers?

The reason why it’s not popular is that torsion bars require a specific length to function effectively, and they’re just isn’t enough space on anything motorcycle-sized to install a simple and efficient torsion bar suspension.

Which component serves as a spring in a torsion bar suspension?

The torsion bar is connected to the chassis of the car at one end and connects to the suspension arm at the other end, which is coupled to it by a spline or hex, as in vintage Chrysler automobiles. Compression of the suspension arm attempts to twist the bar, which resists, producing the ‘spring’. A torsion bar is simply the cylindrical material of a coil spring that has been straightened out rather than coiled.

What Is A Dependent Suspension System?

A fundamental and early version of the suspension system has remarkably simple mechanics. This kind features a solid axle connecting both the opposing wheels, which enables them to operate as one unit. Due to dependence, when one wheel experiences an activity, the other will follow. This is widely used in big haul vehicles.

Examples of a dependent suspension system are: 1. Leaf Spring – is the most traditional one. A series of closely packed plates of steel that are connected to the axle provides the dampening. It can be utilized transversely or longitudinally. 2. Beam Axle—Popularly found in front-wheel vehicles. A solid shaft links both the wheels with the inclusion of a track bar. The movement on one wheel produces a response on the other wheel (beam axles may be both “live” and “dead” axles).

What Is An Independent Suspension System?

In an independent suspension system, each wheel and its connections are not linked in the sense that every component works at the pace of independence. Independent Suspension does not really have a single axle linking them, which allows them to react appropriately to the road circumstances, not simply duplicate or alternate the movement of the other wheel.

The independent systems are that they create an experience like you are gliding on the road, smooth and jerk-free. Examples of an Independent Suspension system are: 1. McPherson strut is often referred to as the single wishbone type. In short, there is a wishbone-shaped linkage that gives a mounting point to the axle; A Coil spring is vertically attached to the Chassis of the vehicle. An anti-roll bar is frequently used in such situations to enhance its stiffness.  This is a common dampening technique used in today’s vehicles such as in General Motors.

What Is the Semi-Independent Suspension System?

The midway position between the dependent and the independent suspension, as the pseudonym indicates. They function at some degree of independence per wheel, which is only constrained by how flexible the connections are. These are used on heavy-duty trucks and other similar vehicles.

Popular instances of semi-independent suspension are: 1. Torsion Bar suspension type, also known as Twist Beam Axle type. The dampening effect is produced by the twisting and bending of the suspension components under stress. A longitudinal crossbeam regulates how each wheel acts. It is characterized as semi-independent since the two wheels respond to deflection independently but yet operate in conjunction, therefore providing them with some semi-balance of independence.

The key components that constitute the torsion bar suspension system are:

History of the Suspension System

A History Of The Torsion Bar Suspension System

Torsion bar suspension was the first vehicle type to utilize torsion bar suspension, which was introduced in the 1930s. However, this is not completely accurate, since the French fitted a comparable suspension in the Citroen Traction Avant in 1934, which was the first car to do so. Given that the word “twisting” is derived from the French word for “twisting,” it is more than obvious who will take home the title.

As soon as the French and Germans began to use torsion bar suspension systems in the international arena, the Americans went out and began putting the most successful torsion bars on Chrysler automobiles as soon as they were introduced.

In 1938, the Czech engineer Ledwink updated and refined the torsion bar, and Ferdinand Porsche loved his changes so much that he quickly adopted them in large quantities in his vehicle models.

When World War II broke out, this kind of suspension was extensively employed in armored vehicles such as the KV-1 and the PANTERA.

Following World War II, virtually all major automobile manufacturers started to include this kind of suspension in some of their models, and the 1950s and 1960s of the twentieth century saw the greatest increase in the use of torsion bar suspensions in automobiles racing cars. This high level of interest on the part of both manufacturers and car customers may be attributed to the compactness of the torsion system, the cheap installation and maintenance costs, and, most importantly, the long-term reliability of this suspension system, among other factors.

Read More:   Types Of Chassis Frame | Here's What No One Tells You About 7 Awesome Things You Can Learn From Studying Auto Chassis

Jaguar’s E-Type was the first car to utilize a torsion bar as a front suspension system, which debuted in 1961. However, with the passage of time and the introduction of new technologies, the torsion bar system started to lose its appeal and popularity. This kind of suspension is much more costly since the production process is very complicated, time-consuming, and expensive.

Today, torsion bar suspension is mostly seen on trucks or SUVs from manufacturers such as Ford, Dodge, Mitsubishi Pajero, General Motors, and others.

Suspension systems are required in automobiles for the following reasons:

1. To absorb shocks and vibrations produced by road imperfections.

2. For the purpose of transferring vehicle load to the wheels (supporting the weight),

3. For the purpose of ensuring the vehicle’s stability (contact of the wheels with the ground),

4. To provide passengers with cushioning and riding comfort throughout their journey.

5. To avoid the occurrence of body squats and body dives.

Suspension systems have the following functions:

1. To protect people and cargo from the effects of road shocks

2. In order to maintain the stability of vehicles in motion (pitching or rolling),

3. It is necessary to keep the wheels in constant contact with the road when driving and performing maneuvers such as turning and braking.

4. To keep the steering geometry in correct alignment.

6. To allow for fast cornering without excessive body roll; and

7. To avoid excessive body squats or body dives while cornering.

Construction and Working Of A Torsion Bar Suspension System

Torsion bar suspensions are basically metal bars that perform the role of a spring. At one end, the bar is rigidly fixed to the chassis of a vehicle. The last end of the bar may be fastened to the axle, suspension arm, or a spindle, depending on the vehicle’s design. For instance, when a vehicle travels alongside the road, the forces produced by the motion of the vehicle produce a torque on the bar, which turns it along its axis.

Counteracting the torque is the fact that the torsion bar obviously wants to resist the twisting effect and return to its normal state. By doing so, the suspension supplies a level of resistance to the forces generated by the movement of the vehicle. This resistance is the basic principle behind a torsion bar suspension system. 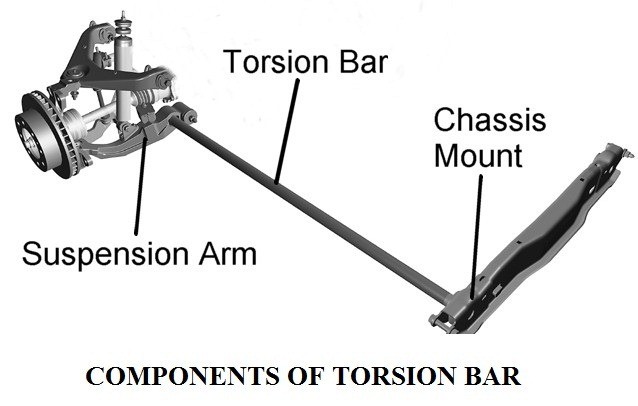 The Working of the Torsion Bar Suspension System

Torsion bars use the twisting properties of a steel bar to offer coil-spring-like functions. One end of a bar is fixed rigidly to the vehicle frame. The far end is fastened to a wishbone, which acts like a lever that travels perpendicular to the torsion bar. When the wheel hits a stone or projection, vertical motion is shifted to the wishbone and then, through the levering act, to the torsion bar. The torsion bar then twists sideways on its axis to offer the spring force. European car manufacturers used this system widely, as did Packard and Chrysler in the United States, through the 1950s and 1960s. 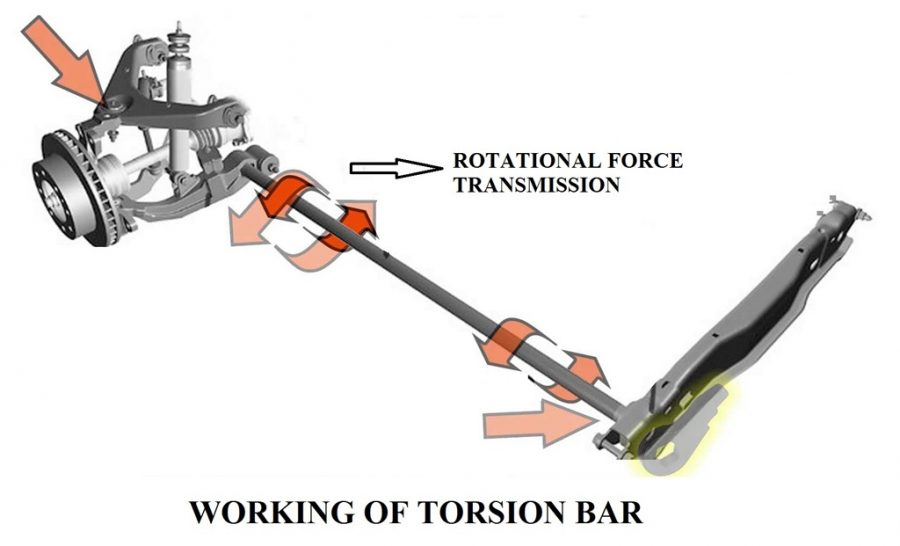 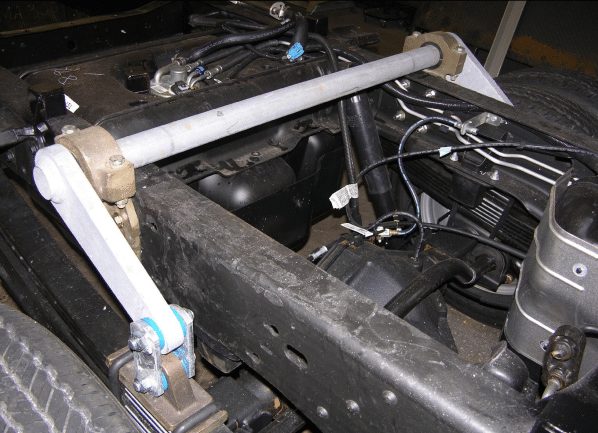 There are also several disadvantages to torsion bar suspensions. The main disadvantage is that these bars generally do not offer what is known as a progressive spring rate. Generally, in suspensions with a progressive spring, the coils of the spring are spaced at dissimilar distances from each other. This permits the suspension system to aid braking, firm steering and handling while still providing for a smooth and comfortable journey. Vehicles with torsion bars are repeatedly tuned to either provide a more firm driving experience at the expense of ride smoothness, or a smoother ride at the expense of the vehicle’s handling quality. 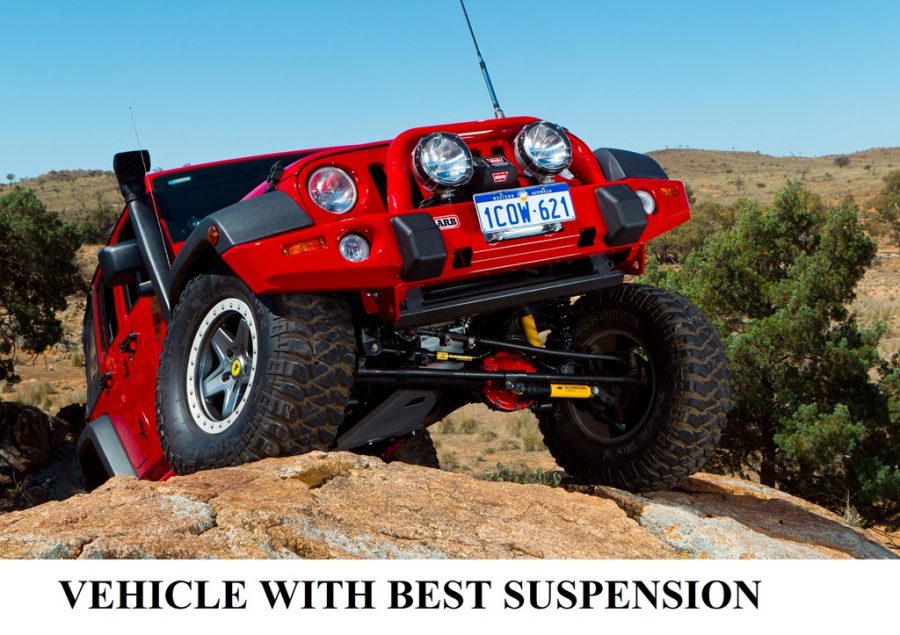 Torsion bar suspension systems were once relatively common in passenger vehicles, but today they are used mainly for the suspension systems of trucks and sport utility vehicles. Some famous automobiles that used this type of suspension were the original Porsche 356, the Volkswagen Beetle, the Porsche 911 models that utilized an air-cooled engine, and significantly, the Chrysler line-up of cars from the late 1950s through the late 1980s.

Compared to multi-link suspensions, torsion beams are generally mechanically simpler, maybe lighter, and are usually easier to package. This is a highly significant advance, especially in the field of cargo space. Torsion beams typically sit lower in a car, something that frequently provides additional trunk space. This is likewise true with the Mazda3 in 2020. The redesigned compartment is deeper and more versatile than before. One of the greatest issues with torsion is unsteady driving while cornering.

Driving a vehicle with torsion in quick bends needs a lot of attention and expertise on the part of the driver. Another drawback is extra vibrations that are conveyed when the vehicle stops. These vibrations are particularly severe towards the back of the vehicle, and this does not help at all with the comfort of passengers in the rear seats. However, this type of torsion bar suspension system is frequently utilized on popular SUVs, and it serves as a front suspension.

The purpose of a suspension damper is to

a. Resist the road shocks

b. Reduce the bump stroke of the spring

c. Absorb the energy stored in the spring

d. All of the above

Answer d. All of the above

An axle is located on a leaf spring by an

b. Soften the spring action and increase the maximum deflection

c. Allow the leaves to slide during the bump movement.

d. Overcome the weakness at the center of a single leaf spring

Answer: d. Overcome the weakness at the center of a single leaf spring

In the case of the clutch, if the spring becomes weak, the remedy lies in

a. Tightening further the springs

b. Interchanging the springs

Which of the following is an advantage of an independent suspension system?

a. Elastic strain energy stored in a coil spring is greater

b. Unsprung weight is reduced.

c. A softer spring can be used without increasing the rolling effect.

d. None of these

Answer: a. Elastic strain energy stored in a coil spring is greater

Another name for a shock absorber is:

The torsion bar suspension can not take up driving and torque effectively.

d. None of these