Types of Chips | Chips That are Formed During Machining

There are three types of chips: 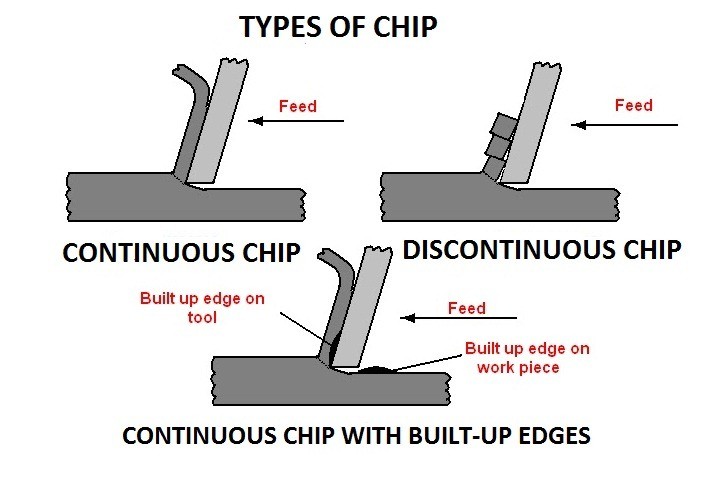 During the cutting of ductile materials, a continuous chip is produced due to the presence of tool cutting edge in compression and shear. These types of chips are in the form of long coils and have the same thickness throughout the length.

This type of chip is required, since it gives a good surface finish, improving the tool life and less power consumption. However, chip disposal is not easy and the surface finish of the finished work gets affected.

The following condition favors the formation of continuous chips.

5. Low friction between the tool face and the chips.

Discontinuous chips as shown in the figure are produced while machining brittle materials such as grey cast iron, bronze, and high carbon steel at low cutting speed without fluids when friction exists between the tool and chip.

Handling of these chips is easier and they can be easily disposed of off since they are having a small length. Also, it will not spoil the finished workpiece surface as they do not interfere.

The following condition favors the formation of discontinuous chips.

6. Cutting ductile material at very low feeds with a small rake angle of the tool.

During the cutting process, the interface temperature and pressure are quite high and between the tool-chip interface, the friction is also high. It causes the chip material to weld itself to the tool face near the nose as shown in the figure. These are called “built-up edges”.

The formation of built-up edges in the continuous chips is a transient and not steady phenomenon. The collected built-up chip material will then break away, part adhering to the undesired of the chip and part to the workpiece. Thus, the process will result in a poor surface finish on the machined surface and accelerated wear on the tool face.

However, this type of chip has some advantages, one important favor of it is that from the wears the rake face of the tool is protected due to moving chip and the action of heat. It may result in an increase in tool life.

The following condition favors the formation of the continuous chips with built-up edges.

The causes of chip formation are many and varied. A few of these causes include:

The impact of chip type in machining