Most modern spark-ignition engines use a battery ignition system. The system consists of the following constituents:

The secondary circuit consists of the secondary winding of the coil, the distributor, and four spark plugs. The contact breaker is driven by a cam whose speed is half the engine speed and breaks the primary circuit one for each cylinder during one complete cycle of the engine.

The breaker points are held on contact by a spring except when forced apart by lobs of the cam.

To start with, the ignition switch is made on and the engine is cranked and turned by hand when the contacts touch, the current flows from battery through the switch, primary winding of the induction coil to circuit breaker points and the circuit is completed through the ground. A condenser connected across the terminals of the contact breaker points prevent the sparking at these points.

The rotating cam breaks open the contacts immediately, and the breaking of this primary circuit brings about a change in a magnetic field; due to which a very high voltage to the tune of 8000 to 12000 V is produced across the secondary terminals. Because of the high voltage, the spark jumps through the gap in the spark plug, and the air-fuel mixture is ignited in the cylinder.

On account of its combined cheapness, convenience of maintenance, attention and general suitability, it has been adopted universally on automobiles.

The magneto-ignition system is similar in principle to the battery system except that the magnetic field in the core of the primary and secondary windings is produced by a rotating permanent magnet. As the magnet turns, the field is produced from a positive maximum to a negative maximum and back again. 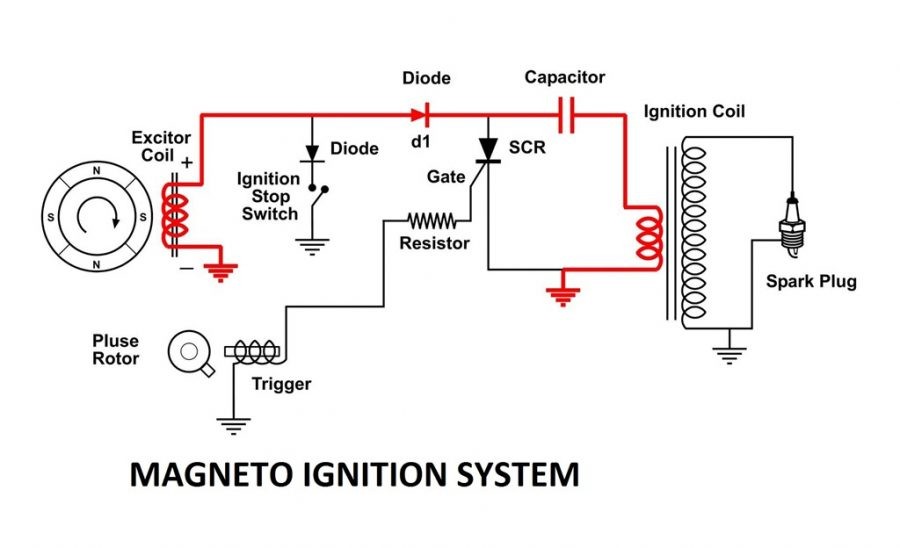 When the permanent magnet has turned for enough so that its contribution to the total field is strongly negative, the breaker points are opened and the magnetic field about the secondary winding suddenly goes from a high positive value to a high negative value. This induces a high voltage in the secondary winding which is led to the proper spark plug by the distributor.

The magneto is an efficient, dependable, self-contained unit which is normally preferred for aircraft engines because storage batteries are heavy and troublesome. Special starting means are required, however, as the magneto will not furnish enough voltage for ignition at low speeds. Variation in ignition timing is more difficult with the magneto, since the breaker point must be opened when the rotating magnets are in the most favorable position.

It is possible to change the engine crank angle at which the magneto points open without disturbing the relationship between point opening ad magnet position by designing the attachment pad so that the entire magneto body may be rotated a few degrees about its own shaft. Obviously, this method is not as satisfactory as rotating a timer cam-plate.