If you’re running a car or motorcycle with a wet sump engine, it’s important to use the right lubricant. A wet sump engine collects oil in a separate reservoir from the engine, and then circulates it back to the engine as needed. This type of design is common in racing vehicles, because it allows for better cooling of the engine. But it also requires a high-quality lubricant that can handle the heat and stress of racing.

This system consists of a large storing capacity of oil at base of the crank chamber. From the sump the oil is drawn by the pump and applied to various parts of the engine. Excess oil after serving the purpose will gradually return to the sump.

This type of lubrication is generally used in some small four-stroke engines. In its construction a cap is present on the big end of the connecting rod which consists of a scoop. When the connecting rod is at the lowest position, the scoop gets dipped into the oil, thus it directs the oil into the holes present in the bearing. Due to the splash of the scoop oil reaches the lower position of the cylinder walls, crankshaft and other parts which requires lubrication. Oil level inside the pump is maintained a pump which takes oil from the sump through a filter. 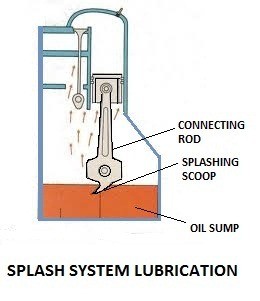 In this system oil is pumped from oil sump and it is distributed to various parts requiring lubrication. The oil is drawn from the oil sump through a filter and it is pumped by means of gear pump. Here oil is delivered at a pressure of 1.5 bar to 4 bar. 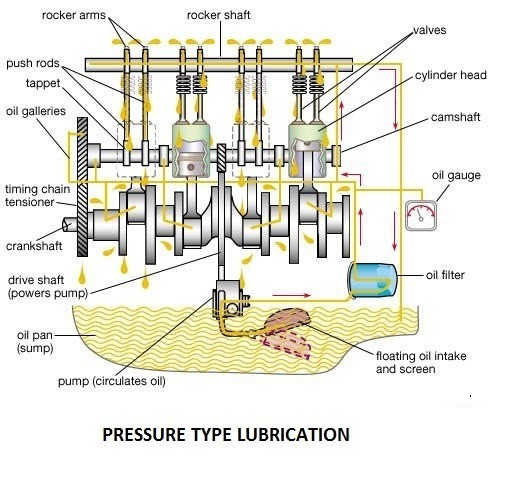 The oil with pressure is supplied to the main bearing in the crankshaft and camshaft. Holes drilled through the main crankshafts bearing journals, communicate oil to big end bearing and also small end bearings through holes drilled in the connecting rods. Generally a pressure gauge will be provided to confirm the circulation of oil to various parts. On the delivery side a pressure regulation valve is provided, to prevent the excessive pressure.

The general arrangement of wet sump lubrication system is shown in the figure. In this case oil is always contained in the sump which is drawn by the pump through a strainer.

This method is a combination of both splash and pressure system. It incorporates the advantage of both splash and pressure system. In this system the main supply of oil is located in the base of the crank chamber. Through a filter oil is drawn from the lower portion of the sump and at a pressure of 1 bar it is delivered by means of a gear pump. Through a nozzle spray the big bearing ends are lubricated.

Thus oil also lubricates the cam, crankshaft bearings, cylinder walls and timing gears. With the help of oil pressure gauge the oil supply is controlled. This system is less costly to install. It enables high bearing loads and engine speed to be employed as compared to splash system.